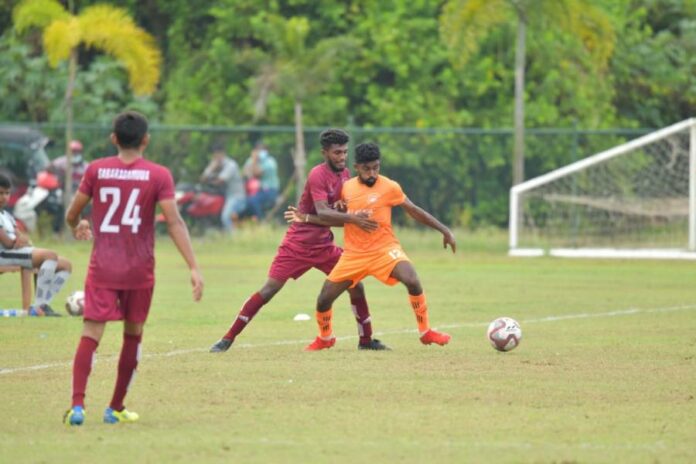 Sabaragamuwa came into the semi-final topping the points table undefeated with 17 points with 5 wins and 2 draws. Skipper Mohamed Shifan led the way with three goals and multiple assists, along with Mohamed Mushfik with 5 goals.

Southern finished 4th in the points table with 11 points with three wins, 2 draws and 2 losses. Supun Dananjaya was the best scorer for them scoring three.

Both teams struggled to settle down in the initial minutes due to the slippery ground conditions caused by overnight rain. Sabaragamuwa looked to keep possession, while Southern used the wings to attack.

With neither team creating any chances, it was a defensive mistake by Southern that let D.L.I. Fernando through with the goalkeeper Rasik Rishad to beat, but Rishad managed to block it.

Southern had Vikum Avishka strictly marking danger man Mohamed Shifan sticking to him like glue. A frustrated Shifan had less than ten touches for the whole of first half and was not allowed to display his devastating pace and dribbles.

Sabaragamuwa did get a couple of free kicks, which were easily dealt with. With just a few minutes left in the first half, Fernando was in the thick of things once again when he seemed to have handled the ball inside the penalty box. The Southern players and bench were up in arms looking for a penalty, but referee Dilan Perera was unmoved as the first half ended goalless.

The 2nd half saw Sabaragamuwa coming back into the game and creating a couple of chances, while Southern’s experienced players Supun Dananjaya and Tharindu Danushka looked out of sorts.

On the stroke of the hour mark, Sabaragamuwa found the back of the net with the Shifan-Mushfik combination which had worked for them in the tournament. With his back to the goal, Shifan’s neat flick found Mohamed Mushfik, who cut back in and smashed the ball past Rishad.

Brian Weerappuli, who came on as a substitute for Southern, tried to pull a goal back but was not successful. Sabaragamuwa could have added another but had to be satisfied with the goal and the advantage heading back home to Rathnapura.