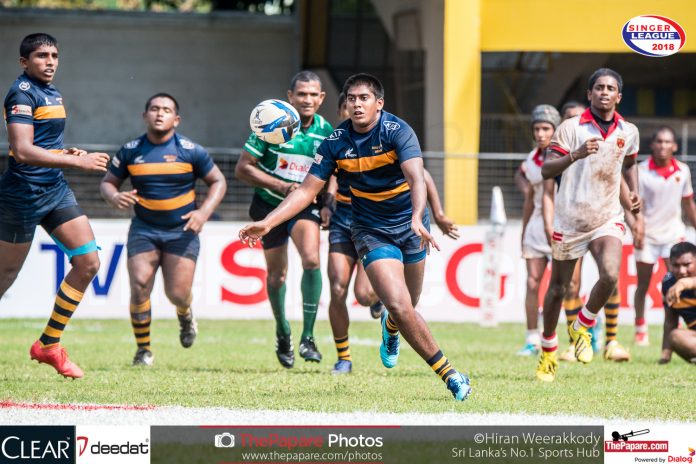 Royal and Trinity U18 Junior teams locked horns in the first leg earlier this evening at the Royal Complex prior to the first XV match for the Simithrarachchi Trophy which is being played annually by both teams.

After a nail biting encounter between the two teams Royal managed to emerge victorious 14 points to 8 amidst a packed Royal complex stadium played. The scores for Royal came courtesy of 2 tries and 2 conversions while the Trinitians managed to score a try and slice a penalty to get their 8 points. Hence Royal managed to secure a tight grip on the trophy taking a lead of 5 points on the Simithrarachchi trophy taking home a 6 point advantage from the first leg. The Trophy has been named after Principal C. E. Simithrarachy who offered the silverware for both teams to battle it out in the late 1940’s.

Trinity grabbed the early lead with just 8 minutes on the clock, courtesy of their wing-three quarter who made a dash to the line after been put into space by his fly-half, Trinity also played with advantage on their after Royal were caught offside. The kicker missed miserably coming short of the posts.

It didn’t take long for Royal to hit back at Trinity, the restart fumbled by the full back led to a scrum resulting on a heap of pressure on the visiting side. With seemingly no way through, it took a little bit of a delayed pass from the full back to cut through the defense and send his wing into space through the gap and over the whitewash for the score. Royal winger added the extras to get the lead.

Trinity got themselves back in front courtesy of a well-struck penalty from 20 metres out in front, after the Royalists were caught offside.

Royal showed so much composure under the high ball and speed in the attacks they imposed into the opposite half but the Trinitians held on attack after attack without letting the Royalists through.

However,without stopping there, Royal carried forward the momentum executing a clinical set piece counter-attack slicing through the center combination of Trinity to dummy pass the full back into the 22m from where on the picked and drop before eventually getting over the try-line. The winger added the extras yet again to make it 14-8 where the game came to a stop at Half time.

The second half was much more intense than that of the first but both teams failed to capitalize on the opportunities that came knocking on the door. Royal to their credit held onto the ball keeping possession with them knowing the full time whistle was coming. Trinity knocked the ball on in the oppositions red zone for the referee to bring the game to an end 14 points to 8 in favor of the Royalists who will take a 6 points lead to the second leg held in Kandy.