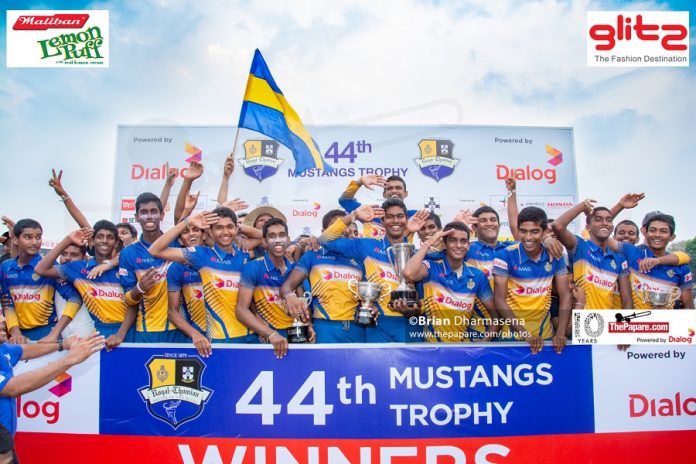 When Kamil Mishara fell for 68, the Royalists were 21 runs short of victory with their last pair out there. What unfolded from there on, felt like a miracle as Lahiru Madusanka hit six after six to secure an unlikely Royal victory over the Thomians in the 44th edition of the Mustangs Trophy at SSC Grounds on Saturday.

“Never expected to win from where we were. I had belief when Kamil and Lahiru were out there. I never expected Lahiru to do it on his own. It’s a crazy feeling.” – Jehan Mubarak – Royal College Coach said after the game

Earlier in the day, S. Thomas’ posted a solid 255/6 in their allotted 50 overs, as they won the toss and opted to bat first.

The Thomian skipper Sithara Hapuhinna hit a half-century at the top of the order while Ryan Fernando also made a fluent half-century, following up from his debut half-century last week at the 140th Battle of the Blues.

The Thomians seemed to lose momentum in the middle overs of their innings, but Umayanga Suwaris- who started off slowly – gave much-needed impetus to the Thomian innings as they headed towards the final ten overs.

He found an able partner in Kalana Perera who took the attack to the bowlers from the other end as the Thomians raced towards the 250 run mark. Suwaris fell in the last over attempting a single, but not before he played a great hand, making 81 off 89 balls.

Kalana Perera, who has been the man to watch out for the Thomians, ended with an unbeaten 37* off just 30 balls as the Thomians racked up over 80 runs in the last ten overs on their way to a score which looked like a match-winning one at the halfway stage.

It seemed like it would all end fast when Kalana Perera dismissed Royal’s makeshift opener Kavindu Pathiratne early on, but smart play from Ahan Wickramasinghe and Skipper Kavindu Madarasinghe got the Royalists out of the woods.

Both batsmen made half-centuries but they fell as the required run rate kept creeping up towards the latter part of their innings.

Kamil Mishara playing a different role in the middle order in the absence of Royal’s star batsman Pasindu Sooriyabandara, made sure he was out there as he took the game into the last ten overs, giving Royal a glimmer of hope while he was out there.

When the Reid Avenue boys lost their 7th wicket, they still needed 66 runs off just 46 balls with Lahiru Madusanka joining Mishara who was unbeaten on a half-century.

Mishara struck a couple of useful boundaries to bring the required rate down but it was when Madusanka took two sixes off Shannon Fernando that the pendulum actually started swinging.

Madusanka then hit a six off Kalana’s next over (46th) as Royal seemed to have the match in the bag with 22 to get off four overs.

The next over from Shannon Fernando turned the game on its head once again as he got rid of the well set Mishara and Manula Perera off consecutive balls before Gishan Balasooriya defended the rest of the over to leave Royal with 21 to get off three overs.

The first ball of the 48th over was a good bouncer from Kalana Perera and he had plenty to say to Madusanka but the brave hearted Madusanka replied him with two consecutive sixes. In a strange turn of events, Kalana Perera then opted to bowl left-arm spin off his fourth delivery only to see that too taken out of the ground as Lahiru Madusanka hit his sixth six of the match.

Madusanka scampered back for two runs off the penultimate delivery of the over, before striking the ball through the covers to secure one of the most famous Mustangs Trophy wins in its history.