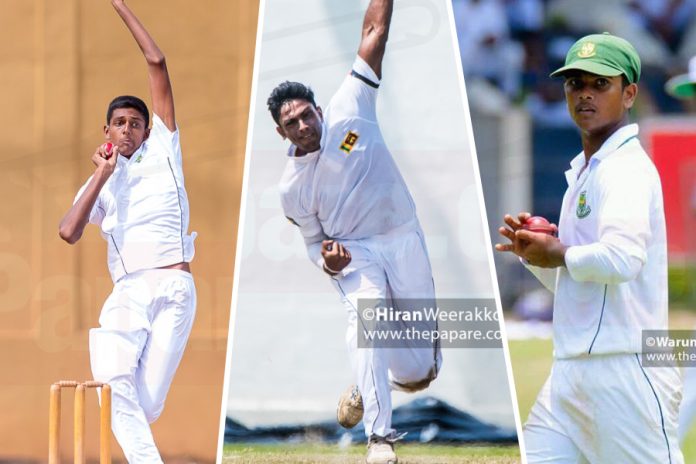 Three matches of Singer U19 Division One tournament came to an end, while three other games got underway today (30th October 2018). St. Sebastian’s College, Moratuwa played against St. Anne’s at home, Moratu Maha Vidyalaya and Dharmaraja College played in Kandy and Gurukula College met Isipathana College at the BRC grounds.

St. Anne’s won the toss and elected to bat first. St. Anne’s batsmen put all their temperament on display as they batted almost the whole of day one. The Annites scored 203 in 90.3 overs for their first innings. Lasith Warnakulasooriya was the pick from St. Anne’s for his patient 50 runs. Praveen Cooray was the best of the bowlers for his 4 for 24.

In reply for their frustration on day one, two batsmen from St. Sebastian’s decided to take revenge on their opponents. Sri Lanka U19 cap Janishka Perera and the new kid on the block, Dunith Jayathunga, hit hundreds in fine fashion. St. Sebastian’s batsmen sent the bowlers all around the park scoring a humongous 505 runs by the end of play. Praveen Cooray also scored an unbeaten 62 to help the cause.

The second innings of the game was an absolute drama unfolding as Kalana Perera ran havoc in the Marian lineup. The left-armer picked up 8 wickets for 17 runs dismantling St. Mary’s for just 72 runs. The follow on was enforced and St. Mary’s fell prey in the hands of Kalana Perera as he kept on destroying the visitors. Perera was extraordinary with the ball picking up 4 wickets for none, taking his tally to a match-bag 12 wickets on just the day one.

Gurukula College batted first after winning the toss and scored 34 runs for their first innings. The top score was just the 26 scored by Likshan Sasanga. Ravindu Rathnayake was sharp with the ball in hand and bagged 5 wickets for 29 runs.

Isipathana College did not put up a convincing batting display either as they were restricted for 185 runs. Young Thevindu Dickwella hit a quick-fire 59 in just 27 deliveries. Rishitha Sankalpa picked 5 wickets for just 11 runs creating trouble for Isipathana.

Gurukula came back very strong after an early collapse in their batting order and went on to post 249 runs for the second innings. Kemira Nayanatharu and Nuwan Chanaka hit fighting fifties for Gurukula College.

In the final session of the game Isipathana came out to bat their second innings chasing a target of 158 runs. Isipathana still tried for a win in the game but they only managed to score 100 runs for the loss of 5 wickets by the close of play.

In reply, Dharmaraja College scored 159 leaving the game open for either team. Dulaj Bandara scored 40 runs for Dharmaraja while Eran Hansamal of Moratu Vidyalaya picked up a fifer.

Moratu Maha Vidyalaya were at 120 runs for 4 wickets when the umpires put the bails down. Skipper, Nishan Madushka top-scored with 74 runs while Virajith Ahelepola picked up 3 wickets for 29 runs.

Dharmapala College, Pannipitiya battled it out with St. Thomas’ College, Matara on the 24th and 25th of October at

Rahula College, Matara played their traditional game against Devapathiraja College, Rathgama at the Uyanwatta grounds, Matara. Rahula College, who were put to bat first scored 230 runs for the loss of 9 wickets in their first innings. Sahan Bandara (59) of Rahula College was the pick of the batsmen while Pathum Madusanka picked up 3 for 51. The game will resume tomorrow (31st October) for day two.

D.S. Senanayake College, Kotte who won the toss and elected to field first wrapped up President’s College for 120 runs in 37.1 overs. Chamath Yatawara was having a splendid day at work as he picked up 7 wickets for 31 runs. Skipper, Iranga Hashan, fought alone scoring 44 runs for President’s College.

In reply, D.S. Senanayke College were at a comfortable position by the end of the day at 178 for 5. Amitha Dabare was the top scorer of the day with 64 runs.