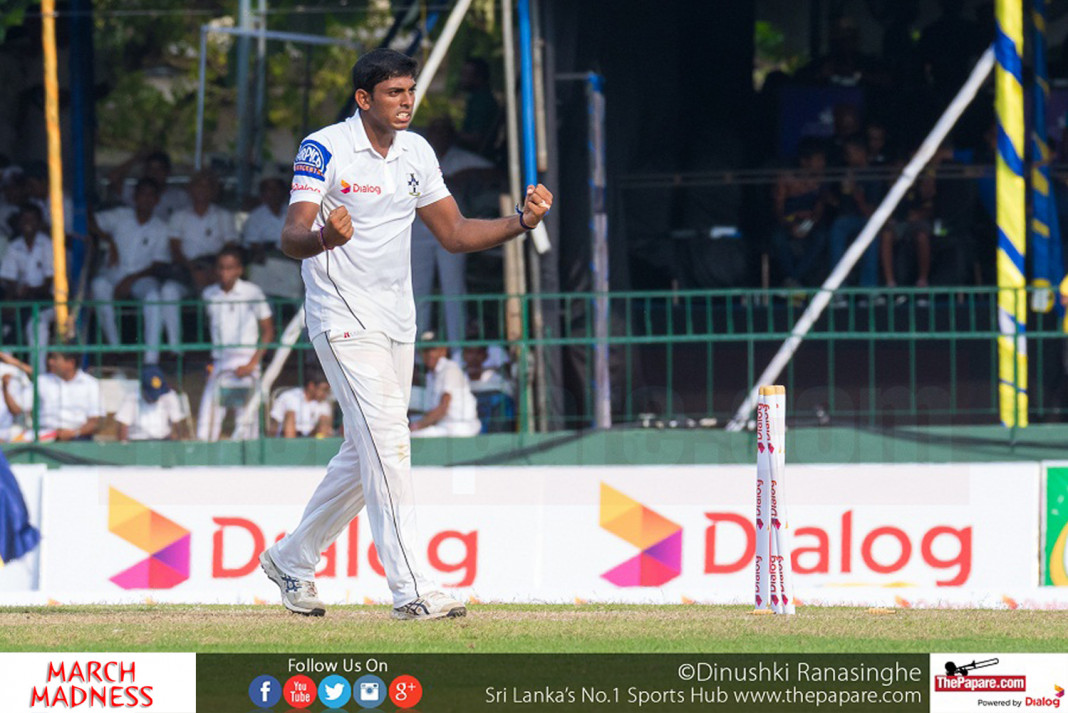 Left-arm seamer Kalana Perera starred for S. Thomas’ College with a brilliant five-wicket haul on day one in the 138th Battle of the Blues against Royal College at Sinhalese Sports Club grounds on Thursday.

Perera captured 5 wickets for 47 runs to dismantle Royal College for 255 after the Thomians opted to bowl first on a dry surface. In reply, S. Thomas’ College was 33 for no loss in 10.3 overs at stumps with both the openers Ravindu Kodituwakku and Dulith Gunarathne in great nick.

Earlier, Perera struck in the 7th over of the match when fresher Yuvin Herath was trapped LBW for 6. The two senior players, Ronuka Jayawardene and Pasindu Sooriyabandara then constructed a well-compiled 69 run stand for the second wicket to put Royal on top at one stage.

Perera came back for his second spell and rattled Sooriyabandara with a bouncer as the last year’s centurion was dismissed for a 48-ball 35. Jayawardene then became Perera’s third scalp as the right-handed opening batsman was clean bowled for 32. From 85 for 1, Royal was suddenly in a spot of bother at 93 for 3 but managed to go into the lunch break on 106 for 3.

Royal lost Ahan Wickramasinghe right after lunch when he hit the stumps with his own bat while going for a cut shot off Pavith Rathnayake. Left-handed Kavindu Madarasinghe was then caught plumb in front by Rathnayake for 38 as Royal lost half of their side for 141.

Ganith Sandeepa and Himesh Ramanayake frustrated the Thomians with a gritty but an effective 83-run partnership for the 8th wicket which took Royal College to 255. Part-timer Dulith Gunarathne broke the stand dismissing Ramanayake while Sandeepa was run-out after he collided midway through a run with Abhishek Perera.

Kalana Perera bowled his heart out throughout his spell of 19.3 overs and deservingly got his five-for when he clean bowled Abhishek Perera as Royal lost their last three wickets in the space of 9 balls.