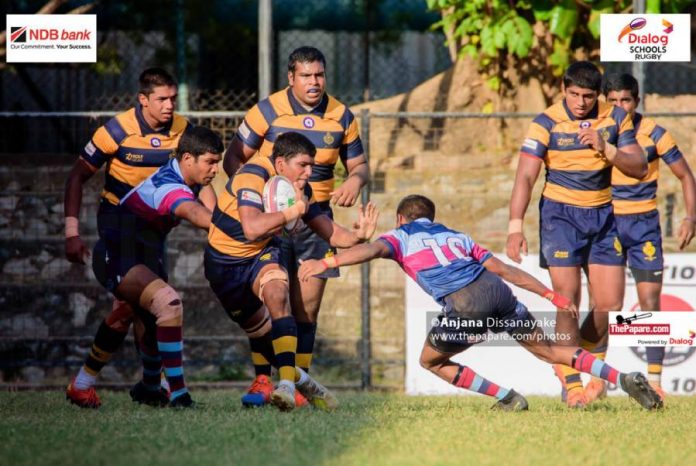 Defending Champions Royal College commenced the 2020 Dialog Schools Rugby League with a resounding victory as they defeated the lackluster St. Anthony’s outfit from Katugastota 41 points to 14, at Royal Complex earlier this evening.

It was a game purely dominated by Royal from the get go as their forwards piled on more than 15 phases before the ball was distributed to wider channels by the scrum half Raveen Shenuka. Skipper Lehan Gunarathne then opened up space for his fullback Chamuditha Chanuka to go over in the right corner as the defending champions went into early lead. (ROYAL 05 – 00 ST. ANTHONY’S)

Royal continued on with their forward momentum as they shifted in to their trademark rolling maul, while the lanky hooker Rajhindu Jayasuriya found his way to the try line, diving over from the tail of a maul to score their second try within the first ten minutes. (ROYAL 10 – 00 ST. ANTHONY’S)

The Anthonian eagles had to do a lot of defensive work as the Royalists dominated the proceedings, but the scrum half Maliksha Perera spotted that they had overlapped in the blind side as quick hands from the back opened up much more space to run for the winger Ushan Jayasooriya, while he he went over to open the scoring for the visitors. (ROYAL 10 – 07 ST. ANTHONY’S)

The home team came back soon after the St. Anthony’s try to score back, as the Skipper Gunarathne who assisted the first try this time changed the direction of the attack and exposed the Anthonians midfield defense by stepping two defenders to dot down the ball to score, while Maleesha Perera extended their lead with his successful conversion.

The last ten minutes of the first half was a stop-start affair as the Antonians had a few golden opportunities, but could not take maximum advantage of it as Royal held on to their lead as they went in to the half-time breather.

St. Anthony’s were quickly on the scoreboard in the second half as they initially gave Royal a taste of their own medicine, as the rolling maul gained a few meters forward. There were quick hands from the forwards, with a big hit from Skipper Matheesh Amarasinghe as he made a timely pop pass to his playmaker Bavan Nishanth, who then opened up the Royal defense. Then the St. Anthony’s backs finished off the move with Harry Shiwak scoring the important try, as he then managed to convert his try to cut deficit into three points.(ROYAL 17 – 14 ST. ANTHONY’S)

Royal were under pressure but a silly penalty from St. Anthony’s allowed the home team to move towards their tried and tested move, the rolling maul, as Hooker Rajhindu Jayasooriya found himself at the tail of the maul to crash over for the second try of the evening, while Maleesha Perera slotted over the conversion. (ROYAL 24 – 14 ST. ANTHONY’S)

St. Anthony’s continued to make a lot of unforced errors, with the home team taking the maximum out of those mistakes as a quick ball from the scrum half Raveen Shenuka enabled their backs move towards the whitewash with the replacement forward Janendra Nanayakkara crashed over for Royal for the fifth try from superb running angle as Anthonians defense was caught napping. (ROYAL 29 – 14 ST. ANTHONY’S)

St. Anthony’s gifted a try to the home side as Chamiththa Gunawardena expertly intercepted pass aimed at Ashan Polwattha as Gunawardena sprinted away to score under the post to seal the game for the defending champions. Maleesha Perera landed the easy conversion to increase lead. (ROYAL 36 – 14 ST. ANTHONY’S)

Royal then lost Kevin Samarasekera and Avishka Gunawardena for two reckless high tackles in quick succession but they managed to finished the game with another try as the playmaker Maleesha Perera powered himself over the line to clinch the opening game.