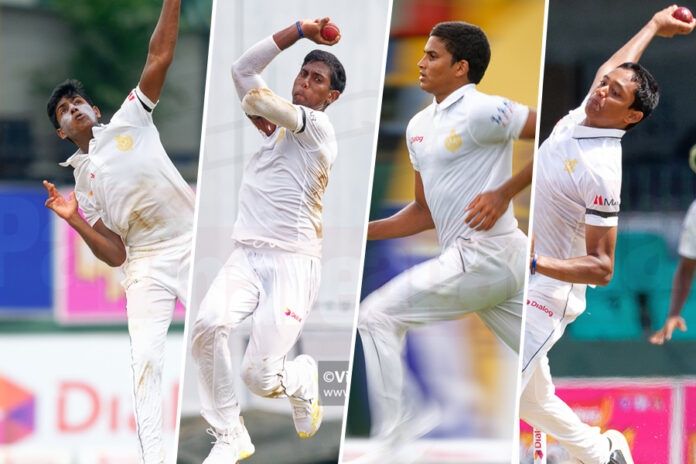 S. Thomas’ College ended a hectic day of the 142nd Battle of the Blues with 87 runs on the board and a wicket to spare as the Royal bowlers ran riot on the 2nd day of play at the SSC.

Having a look at the scorecard, one might think it was Gishan Balasooriya who led the massacre at the SSC. But the reality is that it was the extraordinary spells from the Royal quicks that paved the way for the Thomian collapse.

Having lost a day and a half to Sri Lankan monsoons, this 142-year long battle got underway on the 2nd afternoon, thanks to the unwavering efforts of the ground staff and the organizers.

As the pitch was under the covers for over 24 hours at a stretch, it was crucial that the toss was won, as it seemed a no-brainer to bowl first. The blood-red Dukes ball and the grey cloud cover were an added bonus.

Luck was in favour of the Royalists with the toss, but what unfolded after that cannot be credited into fortune’s account.

Opening the bowling for Royal, Kavindu Pathirathne and Sonal Amarasekara staged one of the best pace bowling spells the Royal-Thomian has seen in a while. The pair used the conditions to the maximum effect and kept the batters on their toes.

Pathirathne was brilliant with his lengths and seemed to swing that red-cherry at will. His wickets column does not reflect the real brilliance of his spell.

Amarasekara on the other end, was much fuller in length and disturbed the batters by hitting their pads consistently, surprising them with the delivery that shapes away. Amarasekara picked up 3 wickets early on, including the prize scalps of Skipper Shalin de Mel and Ryan Ferando.

By the time Balasooriya came into the attack, enough damage was done to the Thomians, leaving them tottering at 21 for 5.

Bala, Royal’s ace left-arm spinner, made life even harder for the Thomians at the crease and bagged the next 4 wickets for 39 runs.

The conditions make life miserable for the Thomian batters while the Royalist bowlers piled up the pressure. However, real ‘Thomas grit’ was on display once again, as they made sure to put up a fight.

Yasiru Rodrigo and Mahith Perera, the Thomian No.9 and No.10, showed a bit of resistance towards the latter part of the day. The pair put on a 38-run stand for the 9th wicket to pull S. Thomas’ out of humiliation and give their bowlers something to work with.

Perera was in fact quite lucky to have evaded an easy run-out opportunity as Dasis Manchanayake messed up the collect at the non-striker’s end.

However, their luck did not last long as the right-hander was castled by Balasooriya as he snuck one through bat and pad.

Rodrigo played a gem of an innings today, facing 95 deliveries for his workman-like 30 runs and kept S. Thomas’ in the game. He has a huge role to play on the last day’s play with both bat and ball.