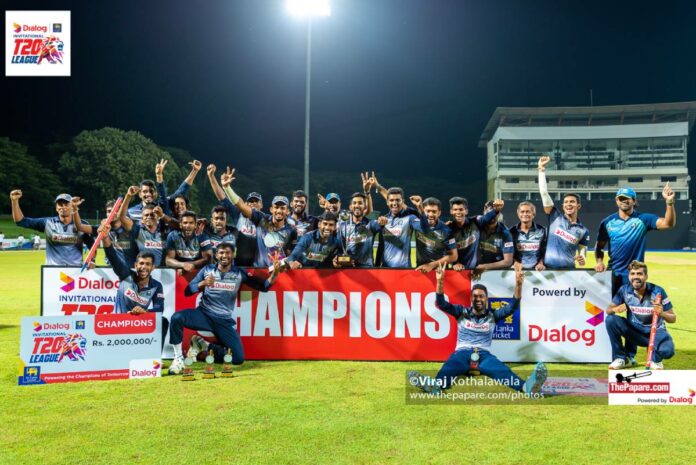 SLC Greys were crowned champions of the Dialog-SLC Invitational T20 League 2021 as they registered a 42-run win over SLC Reds in the final of the tournament worked off yesterday (24th) at the Pallekele International Cricket Stadium.

SLC Greys skipper Dasun Shanaka won the all-important toss in the final and chose to bat first. They made three changes to their playing XI, bringing in Lahiru Madushanka, Ashian Daniel and Nuwan Pradeep in place of Lasith Croospulle, Chamika Gunasekara and Himasha Liyanage.

On the other hand, SLC Reds made only one change to their playing XI as they brought in Asitha Fernando in place of Himesh Ramanayake.

The left-handed duo Minod Bhanuka and Kamil Mishara opened the batting for SLC Greys and gave them a rapid start, putting on 30 runs in 3.2 overs before Mishara was bowled by off spinner Akila Dananjaya for 10 runs.

In-form batsman Charith Asalanka ran himself out for just 1 run in the very next over putting some pressure on the Greys’ middle order. However, Bhanuka and Nuwanidu Fernando rescued the innings building an 82-run partnership in 58 balls for the third wicket.

Bhanuka who had struggled for runs during the tournament, found form at the right time with an impressive knock of 74 runs off 51 balls with 12 fours. Fernando made 47 runs off 36 balls with 5 fours.

Skipper Shanaka, coming in to bat at number 5, gave late impetus to the innings scoring a blistering knock of 48 runs off 17 balls with 4 fours and 4 sixes guiding his team to the highest total of the tournament – 201 for 4 in the allotted 20 overs.

Chasing 202 runs to win, SLC Reds needed a quick-fire start from the openers but it wasn’t to be as Avishka Fernando departed early for just 10 runs. Hard-hitting all-rounder Seekkuge Prasanna was promoted to bat at number three as a strategic move to accelerate the scoring rate but the ploy didn’t work as the speedster Matheesha Pathirana dismissed him for 4 runs.

Chandimal who has been in terrific form also threw his wicket away for 14 runs dropping the hopes of SLC Reds. However, number four batsman Oshada Fernando gave some hope scoring a quick-fire 46 runs off 27 balls with 3 fours and 3 sixes.

With the dismissal of Fernando, it was curtains for SLC Reds as they kept losing wickets at regular intervals ending up posting 159 all-out.