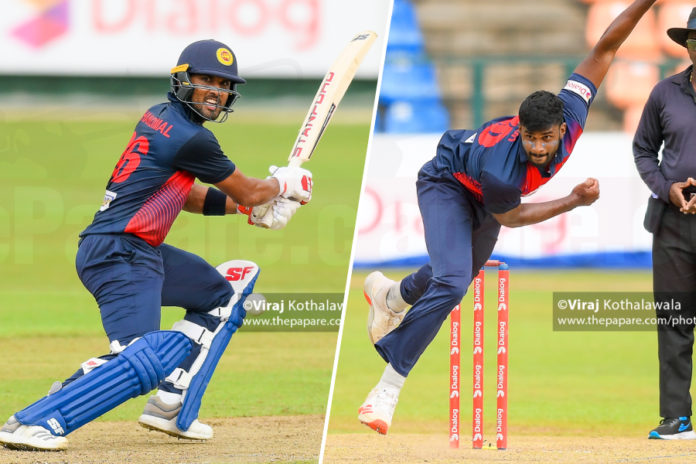 SLC Reds recorded a comprehensive victory over the SLC Blues in the 7th game of Dialog-SLC Invitational T20 League 2021.

Being inserted to bat first, SLC Blues got off to a flying start, recording the highest powerplay score of the tournament so far – 52 runs.

Dhananjaya Lakshan had a rather unfortunate tournament with the bat so far was promoted to open the innings. He scored a worthy half-century, hitting 55 runs off 47 balls at the top of the order.

Number 3, Nishan Madushka, got off to a good start as the pair took the team to 92 runs under 13 overs.

A sudden slip from that point saw the team come crashing down to just 146 runs at the end. Blues lost 4 wickets in the span of 6 runs, courtesy of Himesh Ramanayake’s brilliant spell.

Ramanayake ran havoc in the Blues line-up by picking up 4 wickets for 31 runs, which is also the best spell so far in the tournament.

The Blues did one thing right the death batting. They struck 38 runs in the last 3 overs. Lahiru Samrakoon played his first game for Greys scored a quick-fire 35 off just 21 balls.

SLC Reds came into the game following a wicket-less win in their previous outing, did not get a similar start today. The highest scorer of the last game for the Reds, Avishka Fernando, walked off early after playing a cut straight into the hands of covers for just 9 runs.

Skipper Dinesh Chandimal made sure that he remained calm and composed till his team was safe. The 31-year-old brought up his second consecutive half-century to put his team in a commanding position. He scored 59 runs off 44 deliveries before being stumped off Praveen Jayawickrama’s bowling.

When Chandimal departed, the Reds needed only 40 more runs in 5 overs, which Chamika Karunaratne and Asela Gunaratne duly made sure that they went past the line comfortably.