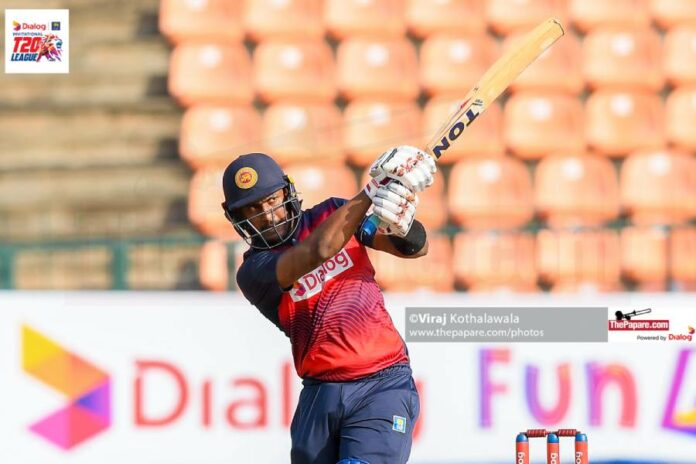 Team Red recorded their first win of the Dialog-SLC Invitational T20 League 2021, by defeating Team Green in the 5th game of the tournament.

The Greens got quite a slow start after deciding to bat first as they saw off the powerplay with 30 runs on board for the loss of one wicket.

The wickets in hand were not utilized well by Team Green, as they slipped into a deep hole by scoring only 49 runs for the loss of 3 wickets at the end of 10 overs.

In desperate need for runs and of course some points in the table, the Greens were struggling at the centre.

Kamindu Mendis was once again the hero for SLC Greens. He recorded his 3rd consecutive half-century, just to end up on the losing side yet again. The 22-year-old left-hander scored a fighting 66 runs which saw 4 fours and 2 sixes.

Read More : Heroics of Pathum, Kamindu goes in vain as Ashen pulls out a wonder!

Sammu Ashan played the supporting role as he ended his knock with 29 runs to his name.

Team Red came into the game with a boost of having their premier all-rounder, Chamika Karunaratne, available for the game. Rightly so, he returned brilliant figures of 3 for 26 in his four overs.

Seekkuge Prasanna was good once again with the ball in hand, as the soldier bagged 2 scalps for just 20 runs.

In reply, Team Red was sensational right from the start of their innings. Their Skipper, Dinesh Chandimal, promoted himself to open the batting and played an impressive knock to ensure that Team Red went past the line without any hiccups.

Chandimal was joined by Avishka Fernando to open the innings for the Reds, and the right-hander played a captivating knock to announce his return to form.

He slapped the likes of Ishan Jayaratne, Nuwan Thushara and Ramesh Mendis to mighty sixes over mid-wicket. Fernando made an unbeaten 82 as he saw his team over the line with all the ease in the world.

Skipper Chandimal scored a risk-free half-century to boost up his confidence after a dip in form. Chandimal unfortunately had to retire hurt as he was struck in the abdominal guard while trying to pull a short one.

The Reds won the game by 10 wickets with 15 balls to go and opened their account in the points table.