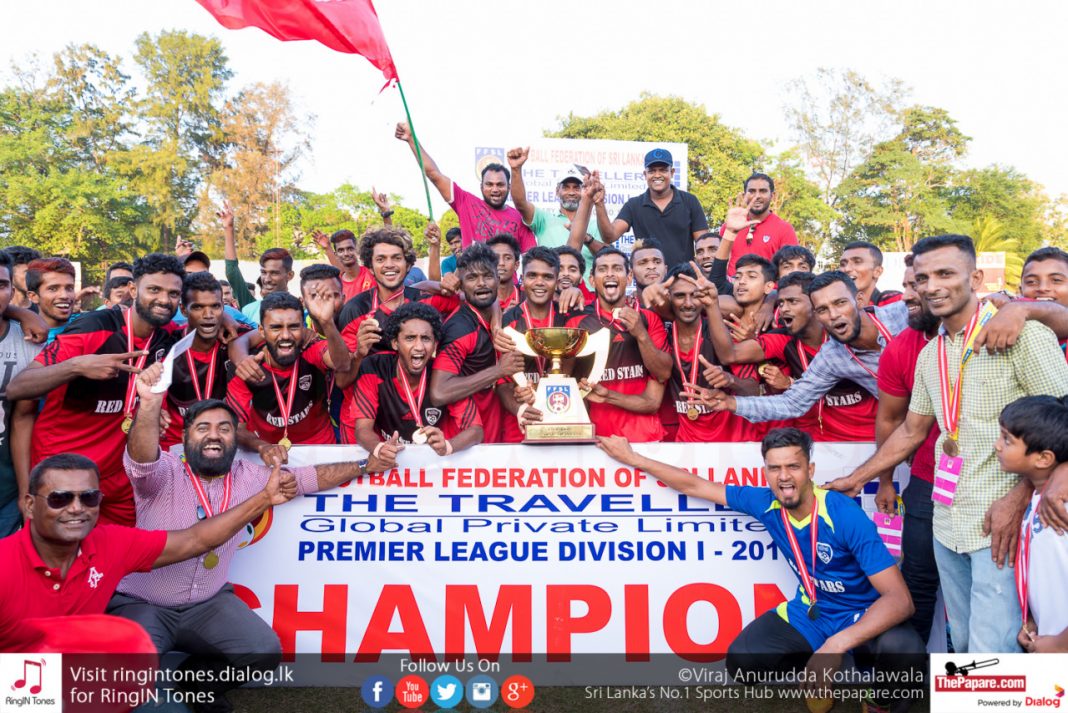 Celebrations erupted at the Vernon Fernando Stadium as the referee blew the final whistle to confirm an emphatic win for Red Stars FC, the Premier League Division I Championship and the promotion to the Dialog Champions League.

Red Stars FC, after narrowly missing out on promotion in 2015 and 2016 had only one objective coming into the 2017 Premier League Division I season.

“We missed our opportunity in the last two years. This year’s target was to become the champions,” Head Coach of Red Stars Mohamed Ramees said to ThePapare.com.

Speaking about the stakes involved, Ramees said, “The club management also gave me a huge challenge where if we did not become champions or qualify for the Champions League, that the club would withdraw. I started the season like that with a lot of pressure,”.

Red Stars started the 2017 season with a 2-0 win against SLTB SC at home. In one of the toughest matches they would have in the group stage, Red Stars had to dig deep against Serendib FC, another club with championship aspirations, to salvage a draw.

Down 2-0 in the 2nd half, the game threatened to derail their campaign at the start. A red card to Serendib FC skipper Mohamed Raj Sheron gave them the opening and they pounced on it to end the game 2-2 deep into injury time.

That match resembled their early days. The road to the Promised Land almost ended even before the journey started. When the club was formed, they were denied entry to their own Football League, but adopted by another League, seven years later Red Stars FC defied odds to make their entry into the country’s Premier Division; the Dialog Champions League.

The Beruwala based club was founded back in 2010, with the intention of affiliating to the ‘Beruwala Football League’. However, the then President of the Beruwala FL had certain differences with the club and denied them of entry to the League.

In their very first year in Division I, Red Stars managed to make it into the semi-finals. They repeated the same feat the next season and vowed never to make it a hat-trick

Second half goals send Pelicans to the final

Red Stars won five, drew two and lost one in the group stage. By the time the Beruwala lads lost their match, in the final match of the group, they had already secured their place in the Super 6 round; but the loss was a bitter pill to swallow.

In a match that Ratnam SC needed to win to qualify for the Super 6, Red Stars shocked the hosts going up 3-0 inside the first 15 minutes. What happened next was beyond belief. By half time Ratnam had equalized and midway through the 2nd half they were up 6-3. A late rally saw Red Stars score two, but it was not enough.

“In the match we lost to Ratnam 6-5, we were leading 3-0 inside the first 15 minutes. The players celebrated too much even before the match ended. That cost us. We made silly mistakes and let in 6 goals before we recovered somewhat to make it 6-5,” Ramees said, speaking about the lows of the season.

The loss to Ratnam spurred on the club and the players, that Ramees made a bold statement;

“Coming into the Super 6, I told my management that I would bring the championship in 4 matches and I was able to do it.”

Their first hurdle was once again Serendib FC, this time away from home at the Jayathilake Stadium in Nawalapitiya. A stout defensive effort saw them grind out a 1-0 win. Comrades were no match for the Red Stars as they ran out 3-0 winners. The week after, it was the same score line at the Weegulawaththa Grounds in Gampola against Red Sun SC.

Three wins out of three and a win away from sealing promotion and the championship, they would meet Ratnam once again. Fittingly enough, what they only did for 15 minutes in the earlier meeting, Red Stars did for the whole 90 minutes as they humiliated Ratnam 6-0.

“The players were really motivated to win the match as there were stories going around in the football circle that we had fixed the group stage match which gave them the win,” Ramees talked about the disappointment that motivated and glued the side together.

Red Stars finished off the Super 6 stage unbeaten with a 5-2 win against Thihariya Youth. The stars of the campaign were Peter Sylvanus, who scored 20+ goals, the enigmatic Mohamed Rahuman and their skipper Idowu Hameed.