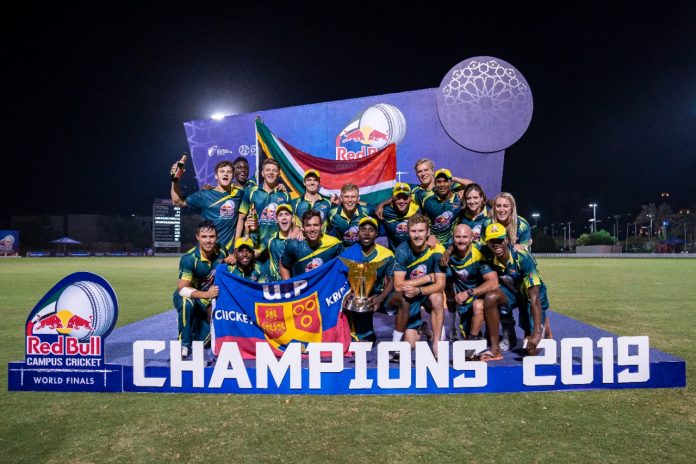 Pretoria University who represented South Africa in the Red Bull Campus Cricket World Finals in Dubai won the title for the third time in the tournament’s history, defeating Pakistan in the final.

The South Africans, who remained unbeaten throughout the tourney, outplayed the Pakistanis in the finals yesterday (3).

Pakistan skipper Moazzam Malik won the toss and elected to bat first. Except for the opener, Shahzar Hassan, none of the other batsmen really supported their team to post a competitive total. Right-handed Hassan, who played the tourney’s previous edition too, struck 43 runs in 25 balls.

The U19 international star for South Africa, Ruan de Swardt shone with the ball as he demolished the Pakistani outfit with a wrecking fifer for just 12 runs.

It was a cake-walk for the boys from South Africa, who had scored over 200 runs twice in this tournament. They went past the line with over 4 overs to go. Jandre Pretorius and Aron Visser both played identical knocks worth 36 runs and remained unbeaten.

de Swardt was awarded the Player of the Match while his team tasted their 3rd Campus Cricket World Cup title.