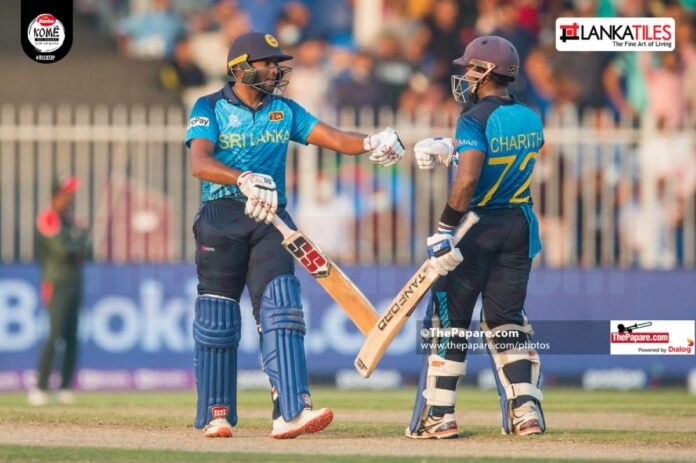 After being reduced to 79 for 4, Asalanka and Rajapaksa added 86 runs for the 5th wicket as Sri Lanka chased down Bangladesh’s 171 with 7 balls to spare, recording the highest successful run chase at Sharjah in T20Is.

Chasing 172 to win, Sri Lanka lost Kusal Perera in the very first over as he was castled while attempting a cross-batted stroke off Nasum Ahmed for 1. After scoring just 6 runs in the first two overs, Sri Lanka maximized the powerplay as Charith Asalanka and Pathum Nissanka took on the Bangladesh spinners with some calculated risks.

While Bangladesh scored 41 in their powerplay, Sri Lanka scored 54 runs to set the platform for the chase. Asalanka and Nissanka added 69 runs for the second wicket before Shakib Al Hasan derailed the innings. Firstly, it was Nissanka who missed the sweep and had his timber shattered. Three balls later, Avishka Fernando missed a straight one as Shakib struck twice in the same over.

Wanindu Hasaranga came in at number five but failed to make an impression when he holed out to mid-wicket as Sri Lanka went down to 4 for 79.

While the Lankan chase was hampered during the 9-12 over period as that four-over slot resulted in just 19 runs for the loss of 3 wickets, Afif Hossain and Mahmudullah leaked 15 and 16 runs in the 13th and 14th overs respectively to help the islanders stay in the hunt.

The momentum shifted completely towards Sri Lanka when Rajapaksa smashed two sixes and two fours in Mohammad Saiffudin’s 16th over, which went for 22.

Asalanka reached his maiden T20I fifty in just 32 balls while Rajapaksa reached his second T20I half-century off just 28 deliveries. The 86-run stand for the 5th wicket ended when Rajapaksa was bowled by Nasum Ahmed, however, the game was done and dusted by then as Asalanka stayed till the end.

Earlier in the day, Bangladesh started off well with Mohammad Naim and Liton Das accumulating runs gradually in the powerplay.

Dushmantha Chameera bowling two no-balls in the 3rd over helped the Bangladesh cause.

Just before the powerplay ended, Lahiru Kumara managed to get a breakthrough as Liton Das was caught at mid-off. There were some heated words exchanged between Kumara and Das, which could result in some sanctions.

While Charith Asalanka’s solitary over cost 14 runs, Chamika Karunaratne, Sri Lanka’s best bowler of the match, cleaned up the dangerous Shakib Al Hasan for 10 as Bangladesh were 2 down for 56 in the 8th over.

Mushfiqur Rahim, coming in at number four had an immediate impact. He used the shorter boundary to target the Lankan bowlers during his brilliant, unbeaten innings of 57 which came in just 37 balls.

He swept Sri Lanka’s main strike bowler Wanindu Hasaranga without any trouble, to which Hasaranga had no answer.

Naim’s innings ended in the 17th over when Binura Fernando, who came into the team to replace the injured Maheesh Theekshana, caught the skying top edge of the opening batter off his own bowling. However, Rahim took control after Naim’s departure as he was able to find the boundary in each over at the death. He reached his half-century in 32 balls as Bangladesh changed gears to set up a daunting chase for Sri Lanka.

Sri Lanka will play their next game in the Super 12 round on 28th October against Australia at the Dubai International Stadium.