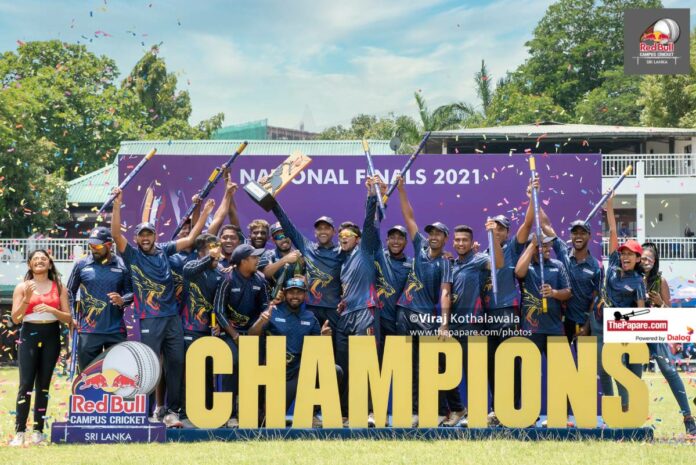 Central Campus who were firm favourites of the tournament were stunned by the underdogs, Imperial College who plucked a win.

Central Campus skipper Avishka Perera set the tone right for a high riding victory for the CCC early in their innings. Perera scored a rigorous 47 off 36 balls before running himself out.

But CCC soon lost their way as the middle-order vaporized in no time courtesy of the fightback from the Imperial bowlers.

The elegant right-hand opener, Sajith de Silva, chipped in with a cameo of a bowling performance returning figures of 2 for 36.

The pick of the bowlers for Imperial was Rusira Dineth who bagged 2 for 23 in his 4 overs.

Walking in with his team in trouble at 91 for 6, Rohan Sanjaya, played brilliant innings for CCC that gave his team something to bowl at. The southpaw struck four sixers and a four in his knock of 38 runs.

CCC posted 135 runs for the loss of 8 wickets at the end of their quota of overs.

Imperial College got off to a faulty start as they slipped to 33 for 6 at the halfway mark of their innings. It all seemed like CCC was heading towards a cake-walk victory.

Then, Thiwanka Lakruwan happened. Lakruwan walked at number eight for Imperial College and changed the entire complexion of the game. He also used the Energizer over to maximum effect that he became the pinnacle of their win.

The left-hander struck 39 runs in 18 balls including an 18-run Energizer over.

Suddenly, by the end of 15th over Imperial College were looking at a feasible equation at 99 for 7.

The rest of the game was set on fire as both teams kept pulling it either as it was eventually 1 to get off the last ball with number 11 of Imperial College on strike. The last ball was a full-toss from Chamindu Wijesinghe which was carved to the extra-cover fence by Ayesh Harshana to seal the deal for Imperial College.

Chamindu Wijesinghe of CCC, who had an exceptional tourney with both bat and ball was adjudged the man of the series by the match referees.