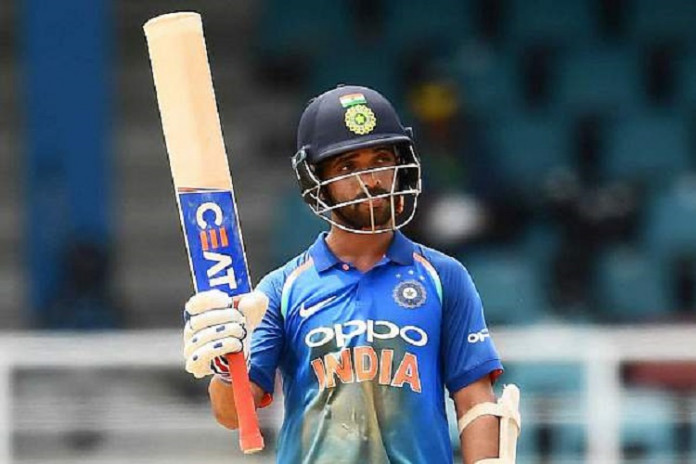 Making the most of the opportunity that was made available due to Rohit Sharma’s absence, Ajinkya Rahane registered a well-compiled 103 off 104 balls – the second One-Day International century by an Indian opener in West Indies – to star in India’s 105-run win in the second ODI at the Queen’s Park Oval in Port of Spain, Trinidad on Sunday (June 25).

Rahane’s 114-run opening stand with Shikhar Dhawan (63) provided the ideal platform, and he continued the good work with a 97-run second wicket stand with Virat Kohli. The Indian skipper laid the finishing touches to the innings, with a 66-ball 87, to help the tourists to a daunting total of 310 for 5.

In stark contrast to India’s innings, Windies couldn’t get going at any stage of their innings, losing wickets at regular intervals and finished with 205 for 6, suffering their biggest loss to India in the Caribbean. Bhuvneshwar Kumar and Kuldeep Yadav starred with the ball.

Bhuvneshwar provided early breakthroughs as Windies’ started shakily in their reply. Opener Kieran Powell chased one away from his body and got a thin edge to the keeper, one that was confirmed by replays after India made use of the DRS to reverse the original decision. Jason Mohammad followed soon after, slicing a catch to Hardik Pandya at point to leave the hosts in early trouble. The quick wickets meant that consolidation was the next course of action, which had a direct bearing on the scoring rate as Windies could only manage 31 runs in the first 10 overs despite a couple of attractive shots from Shai Hope.

R Ashwin and Pandya bowled in tandem, continuing to keep things tight before Kuldeep Yadav got his first opportunity to bowl in ODI cricket. His introduction saw West Indies end the drought of boundaries with Hope finding the fence twice in an attempt to make the most of the Chinaman bowler’s inexperience. Evin Lewis, who was in the midst of a struggle, also managed to break the shackles by taking on the spinners while Hope went on to register a 65-ball fifty and celebrated it with a six apiece off Ashwin and Kuldeep.

With the required rate crossing nine an over, it was imperative that the Windies batsmen continue with an aggressive intent, but the side-effect of that saw Lewis getting out stumped off Kuldeep. The next man in, Jonathan Carter, found it hard to get going straight away, and it was all up to Hope to stay true to his name and keep West Indies in the hunt. However, the required run-rate was threatening to soar out of reach and Hope’s fight came to a halt when he was out leg-before while sweeping off Kuldeep, with India again using the DRS successfully. A short while later, Carter’s struggle ended when he was trapped in front by Ashwin.

A partnership developed between Jason Holder and Roston Chase, but it wasn’t of any consequence as the game had drifted a mile away from the hosts, and they needed to score at more than 20 an over by the time Holder was stumped off Kuldeep in the 37th over. In the end, it was a heavily one-sided result in favour of India, despite the hosts managing to bat their quota of overs as they barely crossed 200.

Earlier, making good use of the field restrictions in place, and aware that there were only 43 overs available in the curtailed encounter because of a rain delay, Dhawan and Rahane hit the straps straight away, converting a strong start into their sixth successive fifty-plus stand, which grew on to became the pair’s fifth century stand in 15 ODIs. The steady start went according to the familiar script associated with India’s ODI cricket of late but it also mandated a wicket against the run of play. And along came one when Dhawan reached out to meet a Nurse delivery, only to be out stumped.

The narrative continued with Kohli trying to get his eye in while Rahane the set batsman, took over the responsibility of scoring the boundaries. Kohli was content taking singles and wasn’t in a hurry to shift gears, while Rahane did the bulk of the scoring in the second-wicket stand as he crossed 50. Nothing was going Windies’ way and they even lost the lone review, their excitement cut short when Cummins had struck Rahane on the pads, as replays upheld the umpire’s call.

As Rahane entered the 80s, Kohli decided it was time for him to start finding the ropes, scoring his first four off the 27th ball he faced. A third ODI century was there for the taking and Rahane made sure not to miss that, getting to the three-figure mark in style with a majestic cover drive off Cummins. The bowler, though, could afford a smile as Rahane’s bid to play across the line saw a bail being dislodged.

Kohli then did what he does best, launching Joseph over cover for a six. But another wicket went down soon after as Pandya, promoted up the order, sliced a catch to third man barely deliveries after being reprieved by a no-ball. Kohli ensured that India didn’t run out of steam, using his wrists to good effect to cart the bowlers around the park. Soon after bringing up a 49-ball 50, the captain scored a four and a six off successive deliveries off Cummins to help India go past 250-run mark in the 38th over.

Yuvraj Singh, however, endured another failure, nicking Holder to ‘keeper Shai Hope to depart for 14 in his 300th ODI appearance for India. But Kohli was undeterred, taking on the bowlers as he executed his shots to near perfection. Cummins, Holder and Joseph, all tried their best to minimise the assault, but they had no answers to Kohli’s dexterity, until he miscued one off Joseph in the penultimate over. Kedar Jadhav and MS Dhoni profited from Holder’s waywardness in the final over, contributing their bit in the death-overs rush that yielded India 107 runs in the last 10 overs.