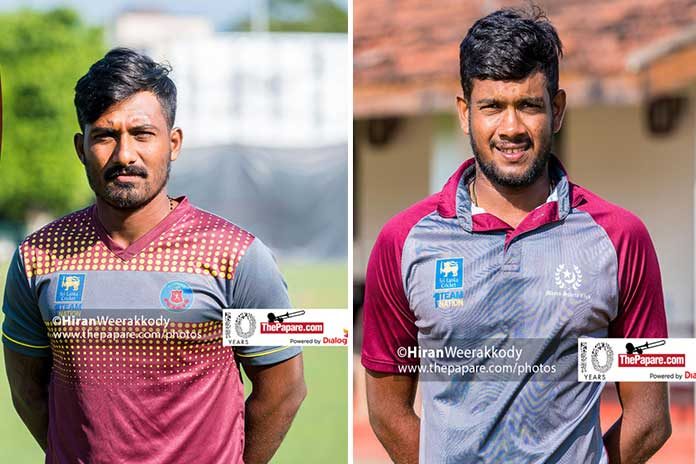 Yet another twin-ton was registered in the SLC Major League Tier ‘A’ tournament today as NCC’s Lahiru Udara hammered 256, while yesterday’s twin-centurion, Ramesh Mendis galloped towards a triple-ton.

Moors SC continued to dominate proceedings in their home ground as their double-centurion Ramesh Mendis continued from his overnight score of 205 to reach the magical 300-run mark, being the 9th Sri Lankan to achieve the feat in a first-class game. He reached the milestone in 270 deliveries, which is the 3rd fastest first-class triple-century by a Sri Lankan after Kusal Perera (244) and Kithuruwan Vithanage (245).

In-reply to Moors SC’s mammoth 652, Negombo CC made 302 for the loss of 9 wickets, thanks to a fighting 77 by all-rounder Roscoe Thattil batting at number 7. The two centurions for Moors SC, Mendis and Sachithra Serasinghe, led their bowling attack too, claiming 3 wickets apiece.

Army SC vs BRC – Group A

Army SC were all over BRC in their newly-built home ground in Dombagoda as they picked up 12 wickets of BRC, after posting 435 runs for the 1st innings. National cap Asela Gunaratne scored the bulk of the runs today along with a 36-ball 42 by hard-hitting Seekuge Prasanna.

All-rounder Dushan Vimukthi’s 5 wickets then kept BRC’s first innings to a mere 88 before Indian Sagar Mangalorkar showed some resistance in the 2nd innings for BRC.

The second day at the P. Sara Oval saw a close tussle between bat and ball as the home team ended the day 51 runs behind the visitors with just 1 wicket in hand. After losing 4 wickets for just 59 runs, veteran all-rounder Jeewan Mendis stood up for the rescue of Tamil Union C & AC with two 50-run stands with Prasansana Jayamanne and wicket-keeper Manoj Sarathchandra. Unfortunately for the hosts, Mendis was dismissed for 83 in the penultimate over of the day. Left-arm seamer Mohomed Dilshad was the chief destroyer of the Tamil Union innings claiming 3 wickets.

CCC vs SSC – Group A

The defending first-class champions and current T20 champions, CCC, continued to dominate their neighbours SSC as they removed 7 wickets for 234 after scoring a massive 548 in their batting essay. Lasith Abeyratne went on to reach 150 while schoolboy and Sri Lanka U19 cap Pavan Rathnayake of Mahanama College scored an unbeaten 71 batting at number 8.

Middle-order batsman Kavindu Kulasekara anchored the SSC innings with 84 while Pasindu Sooriyabandara’s 48 batting at number 8 was their 2nd highest score.

NCC vs Ragama CC – Group B

NCC kickstarted their campaign with a run-fest in their own backyard, scoring a 482 against a formidable Ragama CC bowling attack in 90 overs. Wicket-keeper Lahiru Udara scored the 2nd double-ton of the tournament, remaining unbeaten on 256 in 257 deliveries.