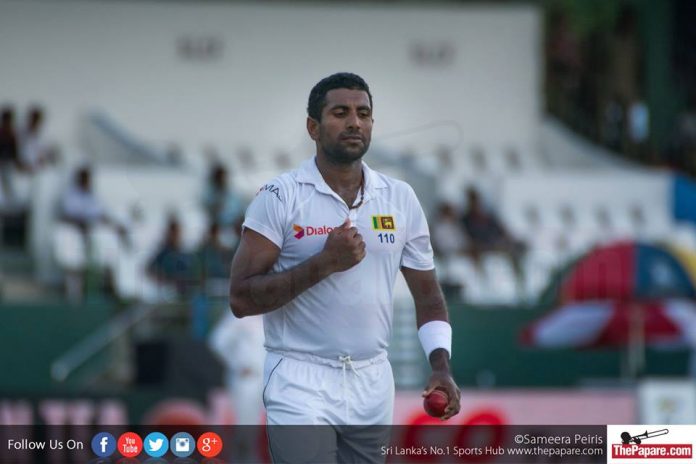 After all, Bob Simpson made a comeback at 41, so you can’t rule out Dhammika Prasad, who will turn 37 next month, returning to Test cricket. However, Simpson’s return was forced on Australian cricket after the cream of their players had been wooed by business tycoon Kerry Packer for World Series Cricket. Sri Lankan cricket is not facing any such dangers and more importantly, the fast bowling reserves are in the safe hands of Chamida Vaas.

Prasad, however, is not a quitter. On Monday night, he posted a short video of himself hard at training in his gym and wrote, ‘I know it’s hard but I want to keep fighting.’ One thing is for sure, you write off Dhammika Prasad at your own peril.

Snub Dhammika Prasad at your own peril

Most of his team mates would vouch for it. Sri Lanka were making a superb comeback after conceding a first innings lead of 108 runs in the Headingley Test in 2014. A hundred by Angelo Mathews and half-centuries by Kumar Sangakkara and Mahela Jayawardene had helped to erase the deficit and move to 277 for six, a lead of 169.

Mathews was still out in the middle and it was vital that someone hanged in there to push the lead beyond the 250 mark so that Rangana Herath could have a go. In walked Prasad. Mathews’ instructions were plain- ‘Don’t do anything silly.’

Dhammika Prasad – Of struggles, scars and a selfless spirit

There was senseless cricket from Prasad who tried to hit the first ball he faced over third man and was caught on the boundary by Joe Root. Mathews, at the non-striker’s end threw away his bat in disgust. A win here would give Sri Lanka their first ever Test series win in English soil and Prasad had blown it up.

Late Michael De Zoysa was the Manager of the side and he was fuming. Michael ordered the dressing room to give the reckless batsman the cold shoulder. From that moment, no one spoke to Prasad for the rest of the Sri Lankan innings.

The antics weren’t over. When Sri Lanka’s chance came to bowl, Mathews didn’t give Prasad the new ball. The captain himself came in as first change and Prasad was introduced to the attack even after Rangana Herath. A spinner being given the new ball ahead of fast bowler is the ultimate insult that you can come up with.

This fired up Prasad who blew away England’s top order and went onto claim a five wicket haul in the innings. All top five English batsmen were victims of Prasad and that included Sir Alastair Cook, Ian Bell and Joe Root. The rest as they say is history as Sri Lanka completed a memorable victory.

Prasad is the senior most Sri Lankan cricketer at present having made his debut in 2008. What a debut it was having claimed three wickets in India’s first innings. What’s so special finishing with three wickets in an innings? Nothing much when victims are certain Virender Sehwag, Rahul Dravid and Sachin Tendulkar!

The Oval – a special place for Sri Lankans

Prasad’s full potential never materialized due to a series of injuries. He was extremely unlucky as well. On the eve of the 2015 World Cup opener in Christchurch attempting a return catch during training, he hurt his hand and had to return home.

He made a comeback later that year and was one of the top ten wicket takers in the world in Tests in 2015. He could have done more but was ruled out with a back injury later that year. That dodgy back has caused unbearable pain and has prevented him from resuming international cricket.

Due to that injury, Prasad has not played any international cricket since 2015. His enthusiasm, however, needs to be commended. So is his good nature to help the poor and the needy. The lockdown is now into its sixth week and Prasad has distributed dry rations to 3000 families weekly since the curfew was imposed.