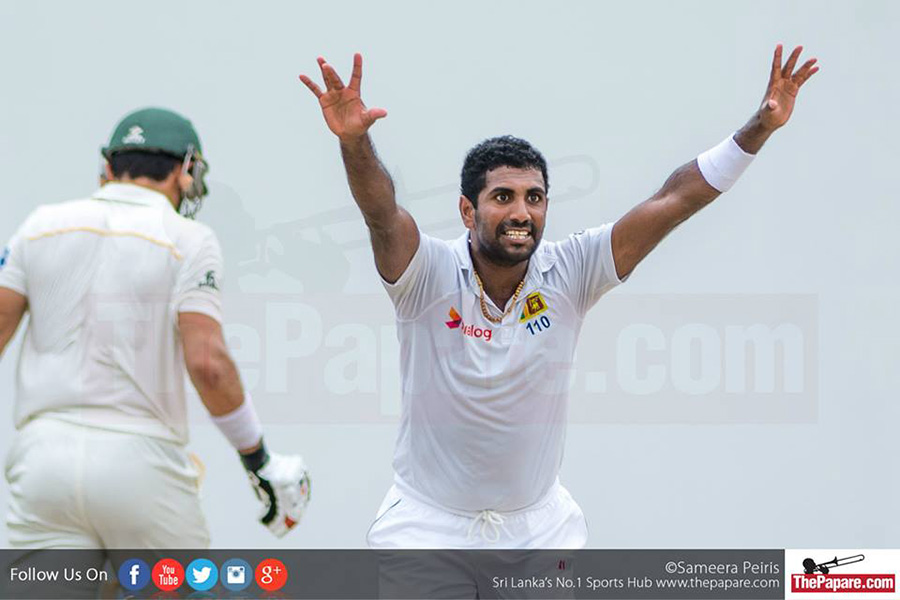 Headingley, 2014. Dhammika Prasad has been given a very specific instruction. ‘Just give the strike back to me,’ Angelo Mathews, batting like a dream at the other end, has told him. Sri Lanka are in a dire situation and desperately need Prasad to give his captain the chance to bat his side to safety.

“I didn’t see the fielder, arright?” Prasad says. “We needed a good stand, and first ball I try the…” he arches back in the chair and plays the upper cut. Prasad is out for a first-ball duck, and Sri Lanka are hurtling more swiftly towards defeat. The full Sri Lankan team decide to give him the silent treatment. Kumar Sangakkara and Mahela Jayawardene don’t say a word to Prasad over the next hour or so. When Mathews returns to the pavilion for Tea, in the middle of a defying stand alongside Rangana Herath, he lambasts Prasad for being so irresponsible.

“It fired me up, arright, because I wasn’t sure if I will play again.” Thankfully for him, Herath and Mathews bat out of their skins, and Sri Lanka, from 277 for 7 when Prasad was dismissed, amass 457. When Prasad takes the ball later, he’s breathing fire. He knows he has let his team down, and is desperate to make up for it.

He bowls 22 hostile overs, taking the wickets of Alastair Cook, Gary Ballance, Sam Robson, Ian Bell and Matt Prior in the process. He brings Sri Lanka close to their first ever Test series victory in England. From zero to hero.

Prasad walks in at one of his favourite joints in Ragama, where he was born. He’s a favourite with the locals, and is at home sitting in a quaint little bar that mostly plays Baila songs. The locals at the other tables keep glancing over, but no one bothers Prasad. When asked if he wanted to switch to a private VIP area in the bar, Prasad immediately shoots it down.

In a grey shirt and track pants, with his collar up, Prasad could very well fit in as just another Sri Lankan. He is generous with his smile, ebullient, talks freely and openly about his personal and cricket life and is curious to know about the person at the other side of the table. When the conversations drift into Singhala, he is quick to apologise and switch back to English for the benefit of the uninitiated. His big eyes never bore into you, and treats everyone with typical Sri Lankan kindness.

He is one of Sri Lanka’s proudest sons but in Ragama, Prasad stands on a pedestal with a halo glowing behind him. He says he might even step into politics when older. Rex Clementine, Cricbuzz’s Sri Lanka correspondent and Prasad’s friend, quickly adds that he’ll win hands down. It’s hard to see why not.

Prasad is your next door neighbour. He is your best friend when needed. He is just another guy at a hangout. He is also Sri Lanka’s oft-injured pace spearhead. He is Sri Lanka’s promise of renewal.

Prasad made his Sri Lankan debut as a precocious talent, a 22-year-old fast bowler capable of bowling with pace and discipline. He made an immediate mark by taking wickets off consecutive deliveries against Bangladesh. Prasad’s soon-to-be nemesis made its first appearance then – a back injury that laid him low. Having played just three ODIs, Prasad was out for almost the next six months.

He returned nearly two and a half years later, and faced up against the might of Virender Sehwag, Gautam Gambhir, Rahul Dravid, Sachin Tendulkar, VVS Laxman and Sourav Ganguly. Three overs later, he had leaked 25 runs and had endured a harsh welcome to Test cricket. He traces a line along his left thumb, a fracture that was a result of stopping a full-blooded Sehwag straight drive. He was treated for a long time, and immediately came back to take his first Test wicket – Sehwag, caught behind. Prasad played through pain for the rest of the Test, but was rewarded with wickets of Dravid, Tendulkar and Gambhir over the course of the Test. That Test was a portent for two things – Sri Lanka had unearthed a gem in Dhammika Prasad, and he needed to be handled very carefully.

Playing through pain became a constant feature in Prasad’s cricketing career. In a career that has so far spanned more than 11 years, Prasad has played just 50 matches, across all formats, for Sri Lanka. He is back from a shoulder surgery that has kept him out of the game since October 2015. Although, the pain has been there for a year, Prasad has slowly brought himself back towards full fitness. He shows the scar the surgery has left, a long thin streak that runs across his right shoulder and down the arm. He also shows the mark the broken wrist left him with, which resulted in him missing the 2015 World Cup and key Tests for his country.

But now, with the shoulder injury behind him, Prasad is ready for his return. “I’m fine now. I will make my comeback against Pakistan,” he adds, the enthusiasm in his voice very apparent. With Sri Lankan cricket seemingly on the decline, much rests on the recently-operated shoulders of Prasad to bring them back into the limelight.

Prasad is a devout Catholic, who grew up in Ragama, a suburb on the outskirts of Colombo. While many players move from the outsides to more comfortable places near their clubs in the city, Prasad elected to stay back in Ragama. He studied at the De Mazenod College, Kandana and made a name for himself as a number three batsman. However fate had different plans.

“There was no one in my college to bowl with the new ball,” he says. “So my coach asked me if I can bowl.” And that was the start of Prasad’s fast bowling sojourn.

His connect with de Mazenod College runs deep. When he’s at home, he usually heads to the college to help coach the players there. He’s even taken up mentoring a young Sri Lankan prospect from his neighbourhood. Krishan Sanjula is the wicketkeeper batsman playing in the Sri Lankan Under 19 team. Sanjula’s family doesn’t have the finances to fund their son’s education and his cricket, so Prasad stepped in. He has not only brought Sanjula under his wings and helped financially, but also ferries the player around the city whenever he can. He drops and picks up Sanjula from his college and his coaching camps, and ensures the young player is not lacking in funds or motivation. He is also known to help others in the area in whatever way he can. He has even roped in a few other cricketers to sing at a private function in order to raise funds for the needy, he says.

“If you don’t help people, what’s the value of life,” he adds, philosophically. If only there were more like him.

Prasad’s route to International cricket came through much toil at the Singhalese Sports Club. For a fast bowler to make a mark on the placid wickets of SSC is no mean feat, but Prasad went on to even captain the club, albeit much later. He had conceded that he struggled with injuries to his back, his side and his hamstring, on top of that he’s had major injuries to his hands and the shoulder. Yet, he remains one of Sri Lanka’s best pact bowlers. The hours of work he’d put in outdid all the injuries he suffered.

Struggling with injuries, Prasad had worked up a specific work-out plan, strengthening just the core body parts and not aggravating the others. During his long hours of bowling practice, he used to place two iron rods and try and bowl in between them. When he had finally got the channel right, he shifted the iron bars to perfect another length. If the work out didn’t finish as he wanted in the morning, he forced his coaches to come back after Lunch. And the grind began again. The long hours finally bore fruit.

That hardwork earned him just rewards soon after, but the desire to improve received various setbacks. As a youngster, Prasad had idolised Waqar Younis, so when his idol was in the country, he sought Waqar’s help. Waqar, to Prasad’s surprise, asked for USD 5000 for a session. That was the last Prasad spoke to him. He continued with his unique approach and forged himself into a bowler full of heart.

Prasad is talked about highly by all the captains he’s worked under. He is not only the kind of bowler who will give it his all, all the time, he is also one to keep the dressing room peppy and happy. During his initial days as an international cricketer, Prasad was more the cliched temperamental fast bowler. If his lines and lengths weren’t bringing him wickets, he was hoping his long stares and sledging did. The big bulgy eyes only added to the effect.

Now, he focuses his energies more on keeping the team spirit high. He is amongst the first players to make a youngster feel at home, and constantly goes out of his way to try and make the newcomers feel at home.

Prasad still remains defiant about his fading international career. He still feels he has a lot more to give to the team, and says he cannot wait to play for the Sri Lankan team again. At 34, he still seeks out help to better his game.

“After shoulder surgery, it will be very tough to bowl like normal again. Especially cutters,” he says. When told about how Anil Kumble overcame his shoulder injury to bowl with equal, if not more, venom, Prasad is impressed. He listens keenly, and even says he would love to talk with Kumble about how he can overcome his injury. It could very well happen when Sri Lanka visit India later this year.

Headingley 2014. Prasad has brought Sri Lanka close to their very first Test series victory. But for all his and his side’s efforts, they are not able to dislodge the last wicket pair of James Anderson and Moeen Ali. For more than 19 overs, Sri Lanka have struggled to get either batsman out.

Prasad quickly takes his phone out and shows the video. He must have it in his favourites list. It’s a video with Singhalese text over it. It’s the video of Sri Lanka’s dramatic last-ball victory against England at Headingley in 2014.

He offers us his commentary, pointing to how Mathews moves Herath from gully to short midwicket. “Last minute arright, just like that Rangayya’s position was changed.” With two balls left for the close of the match, Shaminda Eranga’s bouncer catches the top of Anderson’s bat and flies to where Herath had just been stationed. Sri Lanka had won an epic game.

Prasad’s delight at this win does not come because he was its chief architect. It doesn’t come because he redeemed himself after a horrifying shot. His delight stems from the simple fact that Sri Lanka had won, because that’s just how he is.