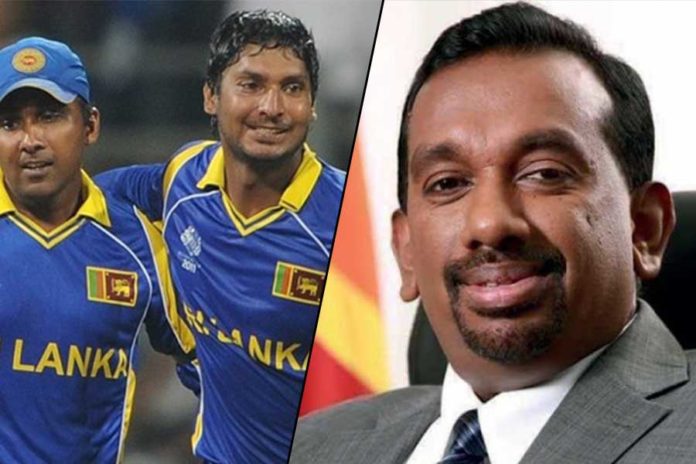 Investigations into the fixing allegations of the 2011 ICC World Cup finals have been dropped after no evidence was found to support former Sports Minister Mahindananda Aluthgamage’s claim.

After calling up the captain of the team, Kumar Sangakkara, the chief selector Aravinda de Silva and opener Upul Tharanga for questioning, the special investigation unit set up by the sports ministry decided to close the case due to lack of evidence. “From the three statements we’ve got, it was clear to us that the 14 points brought forward by Mahindananda Aluthgamage could not be substantiated,” Senior Superintendent of Police Jagath Fonseka told Lankadeepa.

Mahela Jayawardena, who scored a hundred in the finals was also summoned for questioning regarding this matter but the investigations unit decided that the statements from the three persons questioned were good enough to conclude the case.

On the 18th of June 2020, the former sports minister said that the 2011 ICC World Cup Final was fixed for money or other returns and also mentioned that he has evidence to prove his statement. None of which have been made public.

Mr. Aluthgama raised questions about team selection and the omission of Sanath Jayasuriya into the world cup squad. The investigator seems to be happy with the reasoning made by the selector and the players questioned regarding the matter. “All three of the statements we took provided reasonable explanations [as to how that game panned out],” Fonseka said. “They especially gave explanations as to why the team was changed. The other thing is this happened back in 2011,” added Mr. Fonseka.

Even though the minister stated that he took the matter to the ICC officials from ICC have denied any such contact made following the tournament.

“The ICC Integrity Unit has looked into the recent allegations regarding the ICC Men’s Cricket World Cup Final 2011. At this time, we have not been presented with any evidence that supports the claims made or which would merit launching an investigation under the ICC Anti-Corruption Code. There is no record of any letter regarding this matter sent by the then Sri Lanka Sports Minister to the ICC and senior ICC staff at the time have confirmed they have no recollection of receiving any such letter which would have led to an investigation. We have no reason to doubt the integrity of the ICC Men’s Cricket World Cup Final 2011.” said ICC Anti-Corruption Unit General Manager Alex Marshall in a media release made by the ICC regarding the matter.

The case is now concluded and the revered cricketers are cleared of all allegations.

The former sports minister though remained affirmative of his claims and stated that the investigations were ‘wrong and not acceptable.’ He emphasized that he mentioned no players were involved in it. “I do not know based on what conditions did the Special Investigation Unit on Prevention of Offenses Relating to Sports’ summoned Sri Lanka Cricket Captain, Former Captains Kumar Sangakkara and Mahela Jayawardena” stated Aluthgamage on Friday night (July 3).

The fact that the SIU cannot carry further investigations under the “Prevention of Offences Relations to Sports Act” since the offences date before 2019, when the act was sanctioned, was stressed by Aluthgamage on the statement he issued following the conclusion of the investigation. He stated that the SIU was only aware of the fact when Kumar Sangakkara’s attorney mentioned it to the SIU.

The ex-minister also questioned the failure of the SIU to record statements from the then chairman and secretary of the SLC.

“In the statement, I clearly stated from whom information needs to be retrieved. Is it acceptable to close an investigation after recording evidence form only one person? This is how Sri Lanka Police used to close files in the past as well. This needs to be investigated by the ICC. Police Spokesperson made a very unfair statement recently; I requested the President that an investigation be conducted on this as well. Sri Lanka Police have passed the blame on to me, to cover their mistakes,” Aluthgamage added.

“General Manager of the ICC Anti-Corruption Unit, Alex Marshall sent me an e-mail. I have provided more information to him in this regard and I will continue to do so. The International Cricket Council will investigate this. Please do not politicize this. The ones who are connected to fixing the 2011 Cricket World Cup are now spending huge amounts of money to cover this. I request the Ministry of Sports and Sri Lanka Cricket to support the ICC investigation.”

But this statement stood contradicting Alex Marshall’s press release made through the ICC which said “We take all allegations of this nature extremely seriously and should we receive any evidence to corroborate the claims, we will review our current position,” denying any such evidence was received by the ICC.