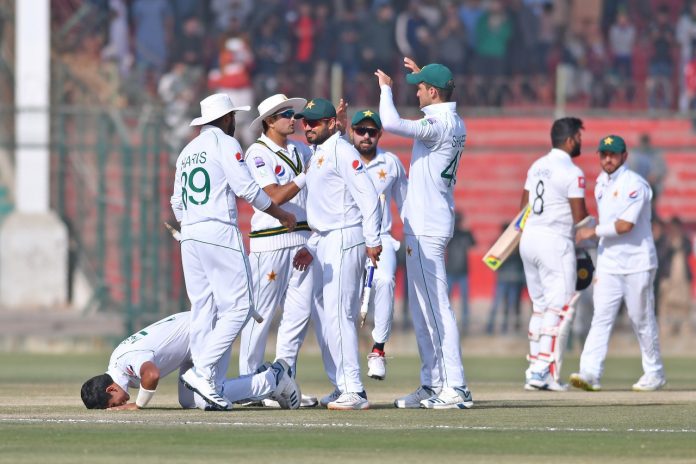 Sri Lanka lost the 2nd Test in Karachi by 263 runs against Pakistan as the visitors lost 3 wickets without adding any runs on day 05 to their overnight total in their chase of 476 set after a staggering batting effort of 555/3d by the hosts in their 2nd innings.

Sri Lanka re-started their chase on day 05 after they were reduced for 212-7 on day 4 by Pakistan seamers who had the luxury of a 476-run target to defend. Day 05 began just like yesterday concluded; with a dismissal as Lasith Embuldeniya failed to avoid nicking Naseem Shah’s nasty bouncer which ended up in the hands of wicket keeper Mohommad Rizwan.

Opener Oshada Fernando who was the only Sri Lankan to dominate the hosts’ seamers, had to conclude his long vigil after he tried to be cheeky with Yasir Shah when his dab to third man went to Asad Shafiq who gleefully accepted the kookaburra at first slip.

Oshada became only the second centurion of the tour from Sri Lanka after Dhananjaya de Silva and has been one of the rare positives from this tour as he grabbed the opportunity from both hands at the top of the order as an opener.

16-year-old Naseem Shah completed his 5-fer as he didn’t waste any time trapping Vishwa Fernando dead in front of the wicket, confirming the huge win for Pakistan as if to announce thatTest Cricket vibes had truly returned to Pakistan after their 10-year long wait.

Pakistan opener Abid Ali was nominated as the Player of the Match and Tournament for two centuries in two matches.

With this win, Pakistan climbed to 3rd position in the ICC Test Championship points table with 80 points while Sri Lanka (80 points) have dropped down to 4th, due to the lower runs per wickets ratio.

Sri Lanka’s next international assignment will be in January, against mighty India in their own back yard in a 3-match T20I series while Pakistan will take on Bangladesh in a Test and T20I series.