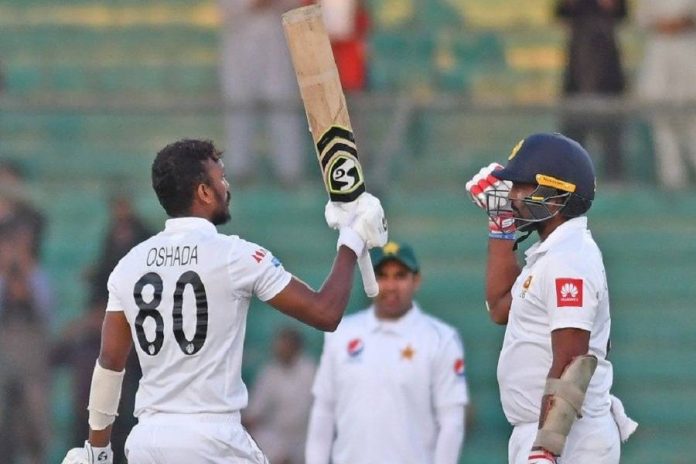 Sri Lanka were almost defeated on the 4th day of the 2nd Test against Pakistan at the National Stadium in Karachi as the visitors lost 7 wickets in their chase of 476 set after a staggering batting effort of 555/3d by the hosts in their 2nd innings.

The Karachi surface which assisted the bowlers on day 1 and 2, causing low 1st innings totals for both teams, seemed like a completely transformed surface by the time Pakistan started to pile up runs in their 2nd innings. Suggesting that the wicket has improved (for batting) even more on day 4, Pakistan scored 160 runs in the 27 overs bowled before lunch at a run-rate of almost 6.

With both overnight batsmen, Azhar Ali and Babar Azam reaching tons Pakistan set a daunting target of 476 for the tourists. Even the number looked like a difficult target, the way Azhar, Babar and Mohammad Rizwan, in the latter part of the session, batted, suggested that Sri Lanka still may have an outside chance of winning if they keep wickets in hand and bat through the remaining 5 sessions.

Babar’s haste towards 100 following Azhar’s stumping off Lasith Embuldeniya, after he scored his first Test ton as Captain and the first since his last Test ton in December 2018, showed how good the wicket was despite some poor lengths by the tired Lankan bowlers. However, Kumara still looked impressive beating the batsmen on quite a few occasions.

Throwing all analysis to the bin, the fresh Pakistani paces came all guns blazing at the vulnerable Lankan batsmen as they kept on picking wickets regularly. They kept bowling in the corridor of uncertainty with slight movement giving the Lankan batsmen the opportunity to poke at away deliveries. Starting with the skipper Dimuth Karunaratne, Pakistan chipped away with 3 quick wickets followed by Kusal Mendis and Angelo Mathews, all nicking to the wicket keeper or the slip cordon.

Dinesh Chandimal was then undone by the pace of 16-year old Naseem Shah, as he missed a straight delivery. Centurion in the previous game, Dhananjaya De Silva’s dismissal by Yasir Shah off an inside edge ticked the only missing box for Pakistan as their lead spinner joined the party after a long layoff.

Niroshan Dickwella joining Oshada Fernando and together the pair started playing freely, proving that the wicket was still batsmen-friendly and the wickets lost were solely because of good lines by the Pakistani bowlers. From 97/5, the two expressive batsmen added 104 runs for the 6th wicket during which both of them went past 50.

Oshada on the other hand reached his maiden Test ton in the penultimate over of the day before Dilruwan Perera became young Naseem’s 3rd wicket in the last ball of the day.

Chamara Kapugedara retires from all forms of cricket

Video – Banking on batting depth and the promising pace battery...