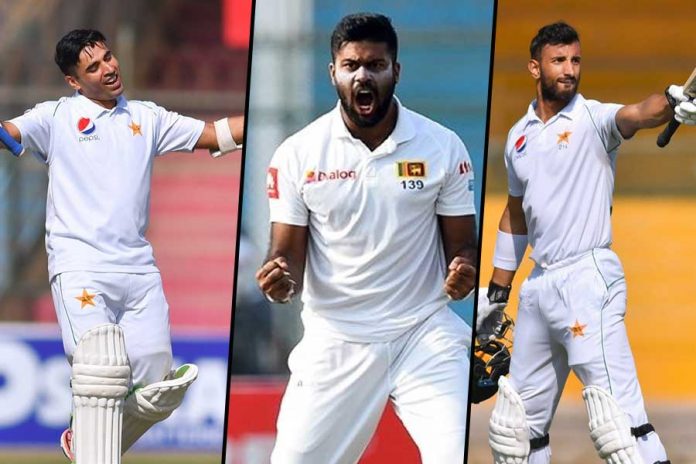 Sri Lankan bowlers were sent on a leather hunt today at the Karachi National Stadium in the 3rd day of the 2nd Test against Pakistan as the hosts amassed 338 runs losing just 2 wickets, batting the whole 90 overs allotted for the day. They ended the day on 395/2 batting in their 2nd innings with a lead of 315.

After an encouraging start to their 2nd innings last evening, Pakistan continued to pile up on their overnight score of 57/0 with in-form opener Abid Ali leading the charge. Despite the Karachi wicket gradually transforming into a batting-friendly surface, Vishwa Fernando managed to find some swing, which he didn’t have yesterday, and was able to beat the batsman on quite a few occasions.

Abid then broke the shackles for Pakistan taking on the spinner, Lasith Embuldeniya from the other end and started off the run fest. With the little swing Sri Lanka experienced early on disappearing, both Abid and his struggling partner Shan Masood got going swiftly and took on the Lankan bowlers with ease.

Experienced Dilruwan Perera was the least threatening with no spin at all. His lengths weren’t satisfying and more often let the batsmen work the ball on the backfoot.

Sri Lanka’s best bowler of the day by far, Lahiru Kumara was introduced a bit late after both batsmen settled and were going well. Despite some short probing spells he too couldn’t tame the free flowing duo. His new ball partner, Fernando had very little to offer with the ball getting old.

The pair went past Pakistan’s highest opening stand in Tests against Sri Lanka which was 156 by Shahid Afridi and Wajahatullah Wasthi in 1999 in Lahore before lunch and went on to reach more milestones after lunch.

The first hour of the middle session saw both batsmen reaching their centuries. This is the 2nd Test ton for both batsmen and incidentally their respective maiden Test centuries have also been against Sri Lanka.

As records kept coming, Sri Lanka were also left clueless on the field paving the way for them to try out various tactics. They tried bowling Embuldeniya over the wicket attacking the leg-stump of right-handed Abid, Dilruwan doing the same with left-handed Masood and Kumara trying out various lengths.

The long-awaited wicket finally came just before Tea when Masood hit a short ball off Kumara straight to Oshada Fernando at the square boundary for 135. Kumara almost had skipper Azhar Ali soon after Tea for 11 runs when he forced him to drop one to Oshada at short-leg, who unfortunately spilled it.

Abid was finally trapped LBW in the last hour of the day almost like how he was dismissed in the 1st innings, again by Kumara for 174. Pakistan then batted on to see off the day with Captain Azhar Ali reaching his first Test half-century since his century in December 2018 against New Zealand in Abu Dhabi.