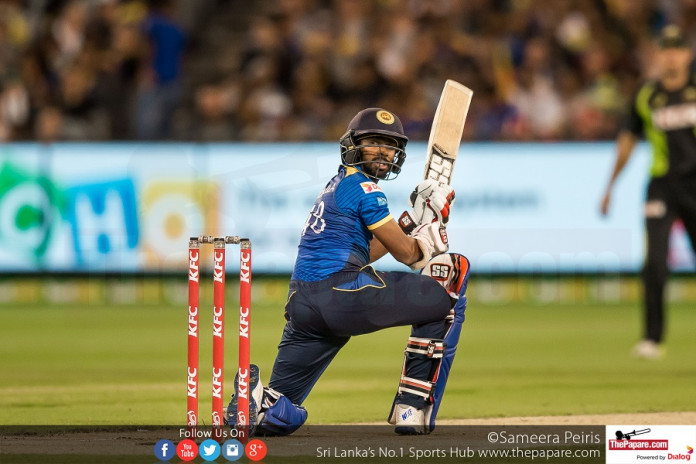 Sri Lanka’s Niroshan Dickwella has been suspended for two limited-over matches after his accumulated demerit points reached five within a 24-month period following his latest breach of the ICC Code of Conduct for which he received a 30 per cent fine and two demerit points.

During the second Twenty20 International against Australia in Geelong on Sunday, Dickwella was found guilty of breaching article 2.1.5 of the ICC Code of Conduct for Player and Player Support Personnel, which relates to “showing dissent at an umpire’s decision during an international match”.

As Dickwella had received a 50 per cent fine and three demerit points in the fourth One-Day International against South Africa in Cape Town on 8 February 2017, with the addition of these two demerit points, he has reached the minimum threshold of four demerit points, which, pursuant to article 7.6 of the Code, have now been converted into two suspension points. Two suspension points equate to a ban from one Test or two ODIs or two T20Is, whatever comes first for the player.

As such, Dickwella has been suspended from his side’s third Twenty20 International against Australia to be played in Adelaide on 22 February as well as the next limited overs match he is likely to play, which is currently scheduled to be the first One-Day International against Bangladesh on 25 March.

The five demerit points will remain on Dickwella’s disciplinary record for a period of twenty-four months from their imposition and if he reaches eight or more demerit points within a 24-month period, then they will be converted into four suspension points. Four suspension points equate to a ban from two Tests or four ODIs or four T20Is, whatever comes first for the player.

The incident in Geelong happened when Dickwella, after being given out caught behind, paused to view the replay, kicked the turf and looked at his shoulder for a prolonged period of time.