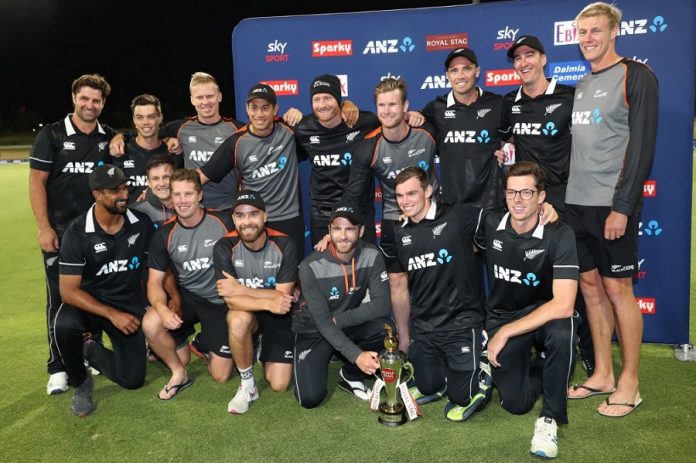 New Zealand put on a complete show to chase down India’s 296/7 with five wickets to spare in the third ODI at the Bay Oval on Tuesday, February 11, and with it handed India their first series whitewash loss in a bilateral ODI series since 1989.

They were last clean swept in a bilateral ODI series by Viv Richards’ West Indies in March 1989, when they had gone down in each of the five games in the Caribbean. As for New Zealand, the resounding triumph was a strong statement, after what had transpired in the five-match T20I series that preceded, which the hosts lost 5-0.

Put in to bat, the visitors lost Mayank Agarwal in the second over, who was cleaned up by Kyle Jamieson for 1. Skipper Virat Kohli showed early aggression, hitting a six downtown off Tim Southee, before he played one straight to third-man off Hamish Bennett when on 9. Meanwhile, Prithvi Shaw (40) showed some spark, striking three fours and two sixes but a poor judgement of run cost him his wicket.

It came down to the men in form, Shreyas Iyer and KL Rahul, and the pair replicated their heroics from the first ODI to rebuild the Indian innings with a 100-run stand. Iyer got to his third successive fifty-plus score of the series, before being undone by Jimmy Neesham’s short-of-length delivery when on 62. Rahul however marched on, finding able support in Manish Pandey (42) who had replaced Kedar Jadhav in the XI. The pair put on 107 runs for the fifth wicket, with Rahul getting to his fourth ODI hundred in the process.

Hamish Bennett though removed both in the 47th over of the innings, and that helped New Zealand restrict India below 300.

Martin Guptill and Henry Nicholls gave New Zealand a breezy start, bringing up the fifty-run stand in as early as the seventh over. Guptill (66) was the aggressor of the two, striking six hits to the fence and four over it, before he was undone by Yuzvendra Chahal’s leg-break that beat his outside edge to hit the top of off. Kane Williamson, making a return after missing the first two games through injury, dragged a short one to mid-wicket off Chahal when on 22, while Taylor’s first dismissal of the series was brought about by some shrewd variation in pace and length from Ravindra Jadeja.

Nicholls (80) remained solid at one end, but when he nicked a short and wide one off Shardul Thakur through to the keeper, and was followed not long after by Neesham, India still stood a chance. However, de Grandhomme took the attack to the opposition, racing to fifty from a mere 21 balls, while Latham played the anchor role. The pair took 15 runs off the 43rd over from Thakur to bring it down to run-a-ball, before de Grandhomme hit three fours and a six in his next to kill the contest. A single from the first ball of the 48th completed a comprehensive five-wicket win for the hosts.

The teams will now contest in a two-match Test series, the first of which will be played in Wellington from 21 February.