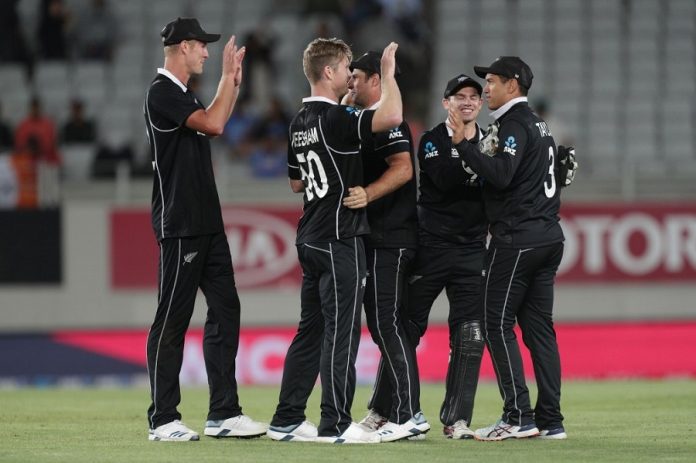 New Zealand wrapped up the one-day series against India with veteran Ross Taylor and debutant Kyle Jamieson combining to set up a 22-run win in game two in Auckland on Saturday.

Taylor, who was also New Zealand’s hero with a century in the four-wicket victory in game one, set up the second success with 73 not out and an unbeaten 76-run partnership with the novice Jamieson.

Jamieson went to the middle with New Zealand 197 for eight and almost nine overs remaining following a spectacular collapse in which they lost seven wickets for 55 runs.

He said Taylor, in his 231st ODI, had a “pretty simple” message to try to bat out the overs.

“It was about trying to stay there and stick with Ross and get to a score that we could defend in the end.”

Captain Tom Latham called their partnership “vital” and said he knew once India lost early wickets that 273 was a satisfactory total.

India were dismissed for 251 with nine balls remaining in their innings, but captain Virat Kohli was not too despondent having already beaten New Zealand 5-0 n the Twenty20 series.

“One-day cricket in this calendar year is not as relevant if you look at the T20s and the Tests, but having said that, to show that kind of fight and see who are the guys who can play under pressure is a big revelation for us,” Kohli said.

New Zealand made a strong start in Auckland with Martin Guptill (69) and Henry Nicholls (41) putting on 93 for the first wicket.

Following Nicholl’s dismissal, Tom Blundell joined Guptill to get the total to 142 before the seven-wicket collapse.

New Zealand had trouble negotiating the spin of Yuzendra Chahal (three for 53) and Ravindra Jadeja while Guptill was run out looking for a quick single.

But while the homeside were rescued by a flurry of boundaries from Taylor and Jamieson, the tourists were unable to assert the same dominance over the New Zealand attack.

Ravindra Jadeja and Navdeep Saini put on 76 for the eighth wicket but Jadeja’s 55 came off 73 balls only included two fours and one six.

The 274-run target set for India was not a daunting prospect on Eden Park with its short boundaries and when Prithvi Shaw smacked the first two deliveries of the innings to the boundary it seemed the tourists would wrap the match up quickly.

But after Mayank Agarwal was dismissed in the third over India struggled to regain momentum.

Jadeja went in at the end of the 21st over when India were in strife at 96 for five.

New Zealand pace bowler Tim Southee — who was unwell and only played because his team had no other bowlers to call on — made history when he dismissed India’s talisman Virat Kohli for 15.

It was a record ninth time he has dismissed Kohli across all formats and moved him past England pair James Anderson and Graeme Swann who have claimed the Indian captain’s scalp eight times.

With Kohli’s early dismissal India looked to Shreyas Iyer to lead them home.

The right-hander played his part until he reached 52, his second ODI half-century, when he lost his composure and tried to cut a Bennett delivery that was heading towards middle stump and succeeded only in nicking the ball through to the wicketkeeper.

The third and final match in the series is in Mount Maunganui on Tuesday.