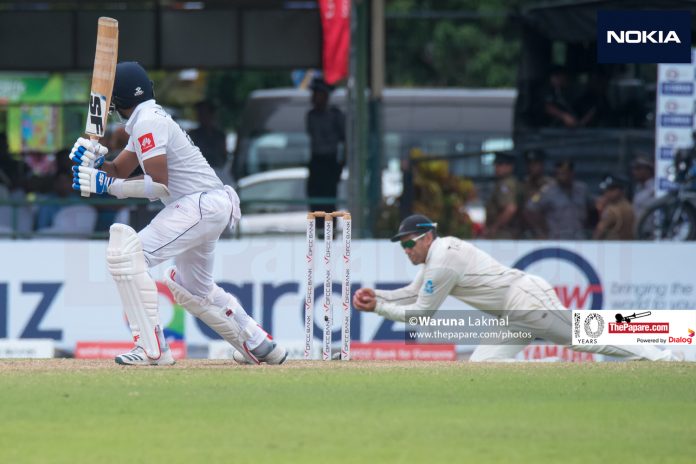 Sri Lanka were bowled out for 122 runs on day 5 of the 2nd ICC Test Championship game against New Zealand, to hand the visitors a comprehensive innings and 65-run victory.

Sri Lanka began the final session of play with 3 wickets in hand and more importantly, with Niroshan Dickwella at the crease. His partner Suranga Lakmal played in characteristic attacking fashion, looking to take on the spinners but also looking relatively good in defense, until Will Somerville managed to get him to glove one to Tom Latham at short leg.

Dickwella looked to keep the strike from that point onwards, going to 13th Test 50 off 151 deliveries. The left-handers longest stay at the crease in his Test career was cut short at 161 deliveries, when he managed to guide a lap sweep straight into the arms of Latham at short leg.

Until then he had played the sweep judiciously, using a high percentage of straight-batted shots to negate the tight bowling dished out from the Kiwis from both ends. Ajaz Patel, who had just come on to bowl, replacing Somerville was the man to pick up the key wicket before trent Boult wrapped things up with a bumper to the throat of Lasith Embuldeniya.

With light deteriorating fast, Sri Lanka will be disappointed that they were unable to hold on to a draw which would have given them a series win as well as 20 Test Championship points.

Earlier in the day….

With plenty of overs lost due to bad weather, the game looked to be headed for a draw midway through day 4, but the Kiwis, who lost the 1st Test of the series, upped the ante with some quick runs, in a bid to claim the 60 Test Championship points on offer.

Coming out to bat on day 5 on 382/5, New Zealand added a further 49 runs before declaring with a lead of 187. The chief enforcer for the visitors last evening, Colin de Grandhomme was dismissed off the 2nd delivery of the day, but that didn’t deter the BalckCaps who smashed 49 runs in 5 overs before the declaration finally came. BJ Watling raced to 100 but it was Tim Southee who did much of the damage, taking Sri Lanka’s bowlers Lasith Embuldeniya and Lahiru Kumara to the cleaners as he smashed 24 in 10 deliveries.

With skipper Dimuth Karunaratne unable to open the innings after being off the field for much of the last two days, Kusal Perera joined Lahiru Thirimanne in the middle to start off Sri Lanka’s innings. The pair didn’t last long however, with the latter being caught short of his crease in the 1st over for 0 and Perera bagging his 1st Test pair a couple of overs later. Perera, whose innings of 153 against South Africa has resurfaced as a topic of discussion since the knock by Ben Stokes last evening, played perhaps the worst type of shot he could have given the situation, as Sri Lanka slumped to 2/4 inside the 1st hour of play.

Angelo Mathews’ last Test series saw him bat an entire day to deny the Kiwis a win in Wellington, but it was not to be this time around as de Grandhomme got him to nick behind a gentle outswinger for 7. The visitors continued to build pressure in the field and before long their two spinners, Patel and Somerville got into the act, dismissing 1st innings centurion Dhananjaya de Silva and Kusal Mendis respectively.

Thankfully, Dhananjaya could spin the ball!

At 22/5 going into Lunch, Sri Lanka still had hope given that their best batsman Karunaratne was at the crease – however, the left-hander was given out lbw, while not offering a shot to Southee, with more than half the overs for the day remaining.

Tom Latham was named Man of the Match for his 154 while BJ Watling took home the Man of the Series award.

Video – Certainly a series Sri Lanka could have got ahead...

Video – Sri Lanka are extremely tough to beat in their...