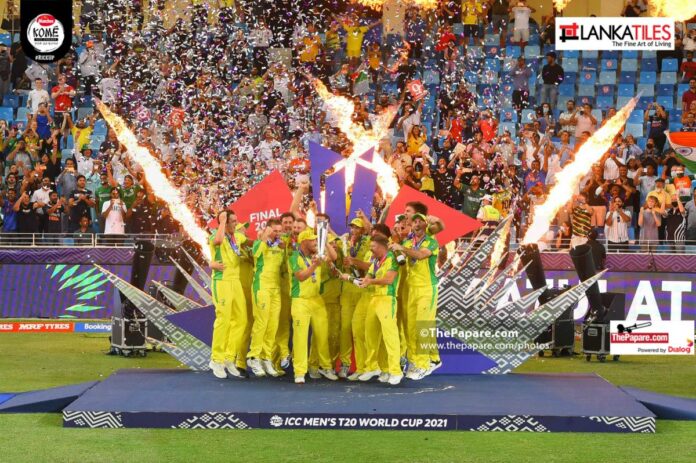 Reporting from Dubai David Warner and Mitchell Marsh hit superb fifties to steer the Australian run-chase after New Zealand posted 172 at the back of a brilliant knock by Kane Williamson, who hit a magnificent 85 off 48 deliveries.

Williamson was slow initially but the way he paced his innings was terrific. After being dropped on 21 by Hazelwood, Williamson pounced on. Before the 10-over mark, the New Zealand captain was on 18 off 19 balls. Since the drinks break, Williamson struck at a brilliant strike rate of 231, hammering 67 runs in 29 balls before falling in the 18th over.

New Zealand had a clear plan of attacking the fifth bowler quota of the Australian attack. They showed intent when Daryll Mitchell lifted Glenn Maxwell’s first ball in the 3rd over of the match. With the hero from the semi-final, Mitchell falling for 11, the Kiwis expected a solid effort from the senior batters. Guptill’s slow 35-ball 28 was ended by leg-spinner Adam Zampa.

Williamson’s knock of 85 equaled the highest score by a batter in a Men’s T20 World Cup final – Marlon Samuels’ 85* against England in 2016. The Kiwis were behind the scoring-rate in the first phase of the innings, but managed to score 115 runs in the final 10 overs. New Zealand’s score of 172 topped the highest team totals in a Men’s T20 World Cup final before it was eclipsed by Australia, in the next innings.

Josh Hazelwood was the pick of the bowlers for Australia. He finished his quota of 4 overs for just 16 runs with 3 wickets whereas Mitchell Starc went for 60 runs. Chasing 173 runs to win, Australia lost captain Aaron Finch early when Daryl Mitchell held onto a good, diving catch off Trent Boult. The Aussies accumulated 43 runs from the powerplay overs.

With New Zealand bringing on spinners, they expected to stem the run-flow but some smart hitting and poor bowling by Ish Sodhi and Mitchell Santener, enabled them to keep the required run-rate below 10 runs per over. Warner reached yet another T20I half-century with a six off Jimmy Neesham as the Warner-Marsh stand threatened to take the game away from New Zealand.

With Australia slowly taking the command of the game, Williamson brought back ace seamer, Boult for the 13th over and he castled dangerous Warner for 53 to break the 92-run stand. Despite the wicket of Warner, Mitchell Marsh continued to punish the Kiwi bowlers, reaching

his fifty in 31 balls – the fastest in Men’s T20 World Cup finals. Marsh and Glenn Maxwell made short work of the rest of the chase, adding 63 unbroken runs for the 3rd wicket as Australia reached the target with 7 balls to spare. Having come second best in the 2010 T20 World Cup edition, with this win, Australia added another trophy to their five previous ODI world cup titles.