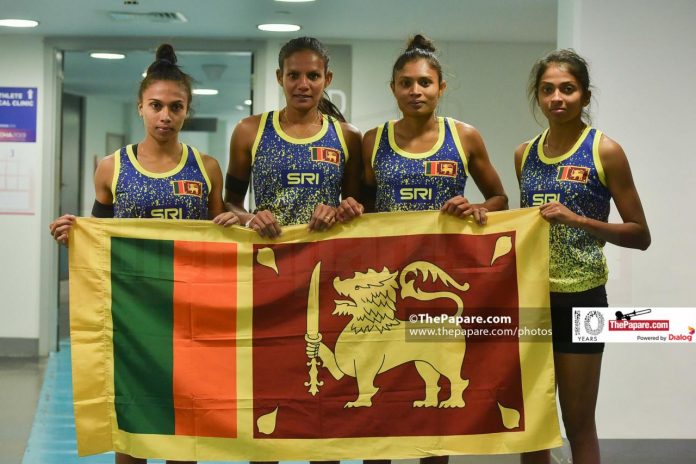 Sri Lanka signed out of the 23rd Asian Athletic Championship which was held at the Khalifa stadium, Doha Qatar four days with a new national record which came in the Women’s 4X400m.

The team consisting of Nadeesha Ramanayake, Dilshi Kumarasinghe, Upamalika Ratnakumari and Nimali Liyanarachchi fell agonizingly short of a medal finish despite running their hearts out but had the consolation of breaking the 20 year old national record which was established in 1999 in Nepal at the South Asian Games by a team which had the likes of the legendary Sri Lankan sprinter Damayanthi Darsha. The quartet recorded a time of 03:03.06 to claim the national record.  The first lap of the race was run Nadeesha Ramanayake who got a decent start and handed the baton to young Dilshi in third place.

Dilshi was arguably the best lapper of the race and showcased why she is one of the great prospects for the future. She at one point overtook the experienced Indian runner Poowamma.  Skipper of the Sri Lankan contingent to the Asian Athletic Championship, Nimali Liyanarachchi running the anchor lap had to handle the likes of Salwa Naser of Bahrain who whisked past her but gave it her all in the home straight to get close to the Japanese athlete who was in third place, Unfortunately, she fell an agonizing couple of inches short.  It was a hearty performance from a team which ran their very first race as a unit and to deliver a national record with the competition they faced is a clear indication of what they are capable of provided they are given enough chances to compete. Bahrain won Gold with India and Japan winning Silver and Bronze respectively.

Gayanthika Abeyrathne had yet another disappointing race on the final day of the championship. The Silver medalist at the 2017 Asian Championship – women’s 800m event, Gayanthika was one of the leading medal prospects at this year’s competition. She couldn’t to live up to expectations as she finished placed 4th, recording a below par time of 2:05.74. Gayanthika’s disappointing championship continued as she failed to live up to her personal best in the women’s 1500m. She clocked a dismal 4:42.24 in the event which placed her in 11th place. If Gayanthika delivered her personal best of 4:18.7 or even came close to it she could have finished in the top 5 finishers of the race.

The two long jumpers Dhanushka Piyarathna and Prasad Wimalasiri were again disappointing in the Men’s Long Jump final. Piyarathna was placed 7th with a best leap of 7.65m while Prasad who recorded a best leap of 7.49m was placed 8th overall. Both these jumpers seemed like they had not managed to adjust to the conditions of the track as they struggled to get into rhythm. If they had performed to their personal best (Piyarathna – 7.95m & Prasad 8.14m) Sri Lanka could have ended up with a medal. The Gold of the event went to Japanese jumper Yuki Hashioka with a distance of 8.22m. Chinese athletes Yaoguang and Changzhou won Silver and Bronze respectively with their best jumps which were measured to 8.13m & 7.97m respectively.

The 23rd Asian Athletic Championship concluded with Sri Lanka earning a solitary medal in the competition, while the new national record established by the 4X400m team in the final event of the championship added some consolation. Sri Lanka left the country with the hopes of bagging a minimum of 3 medals and missed out on 2 very close chances in the Women’s 4X400 relay and the Women’s 3000m steeple chase.