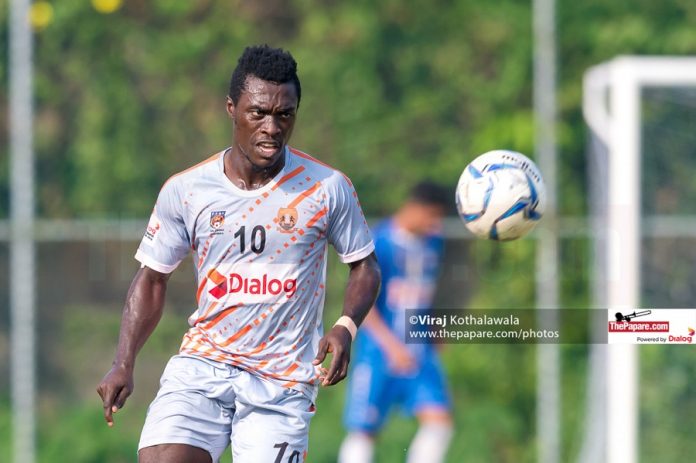 Negombo Youth came into this clash bottom of the table with just 7 points, needing a win to keep their hopes of survival alive. Matara City meanwhile were 9th with 17 points.

Matara City got their first chance very early as they broke into the opposition box where Larbi Prince took a shot, but a quick reflex save by Chinthaka Sujeewa saw them denied.

City’s continued to dominate and in the 7th minute were rewarded with the opening goal. They won a free-kick in a dangerous area and it was struck powerfully over the wall and past the diving goalkeeper into the back of the net by Boadu Prince.

Negombo nearly equalized from a corner when Niluka Janith struck straight towards into the box. It had goalkeeper Chawle Udayanga completely beaten, but a last scrapped effort by skipper Adavu Isaac saw it cleared off the line.

City came close again when Boadu showed good skill to get past the defense onto the edge of the 6-yard box before his shot was saved by Sujeewa. The following corner saw another good save by Sujeewa before Nuwan Shashikapriya struck the rebound wide.

Things went from bad to worse for Negombo Youth, when in the 28th minute a Matara player was cut down inside the Negombo box and the referee pointed straight to the spot. Boadu took responsibility, and after a slow stuttered run up, struck it into the right corner past a flat footed Sujeewa.

Negombo had a few more chances in the half before Sujeewa was yet again called on to make a good save to keep Negombo in the game.

The Matara lads scored their third after a close-range effort by Larbi was brilliantly saved by Sujeewa. His defense failed him however as Larbi was allowed to smash in the rebound.

Goalkeeper Sujeewa continued to be Negombo’s best player as he pulled off save after save against the deadly African attack duo of Matara who were wreaking havoc on the Negombo defense.

Boadu completed a well-deserved hat-trick in the 71st minute after another free-kick struck towards goal flew into the back of the net to put Matara 4-0 up.

Negombo almost pulled one back after some good build-up play led to a strike on goal by Thuwan Rumlan, but it was well saved by Udayanga. Minutes later Bright Eshun had a shot on the turn but found it sailing over the bar.

In the 89th minute City broke on the counter into the Negombo box. The initial shot was yet again saved by Sujeewa, but the rebound was hammered in by Larbi for his brace.