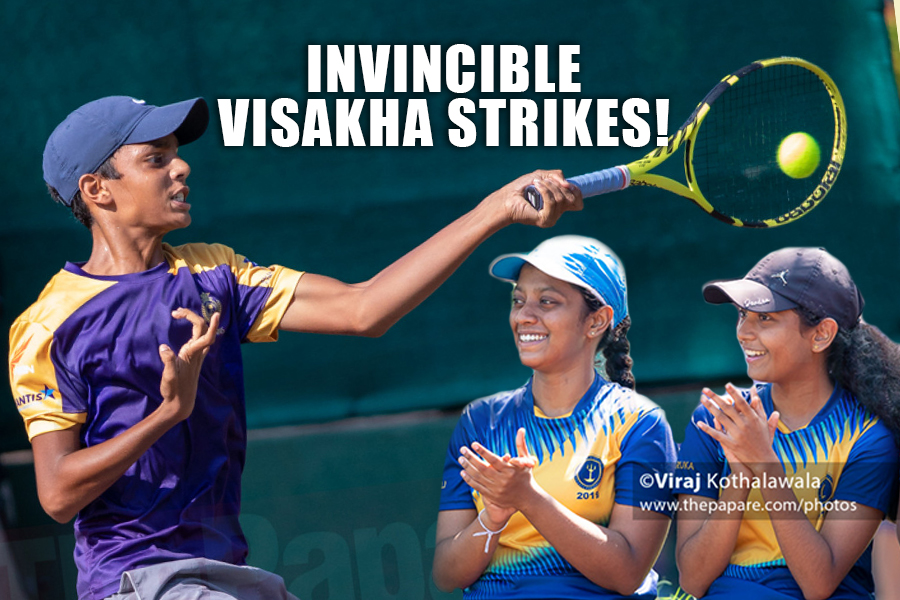 Visakha Vidyalaya dominated this year’s National Schools Tennis Tournament clinching both the Under 17 and Under 20 titles. The tournament was held at the Garden Club in Kandy from the 21st of October.

With over 20 top schools in contention this year, the Games were taken to Kandy for the first time in its history. After 2 days of continuous fierce competition, the 2019 National School Games Tennis victors were crowned, while some had to play an extra day due to rain interruptions.

This year’s tournament attracted teams mainly from Colombo, Kandy and Jaffna. Visakha Vidyalaya claimed both the Under 17 and Under 20 titles after a rather disappointing stint at the All Island Interschool Championship.

The junior Visakha clan met Ladies’ College in the final of the Under 17 category where they registered a convincing victory to win the overall title while Musaeus College managed to claim the Bronze medal.

The Under 17 team of Royal College avenged their loss at the Interschool final against S. Thomas’, at the National Schools Games. They defeated Ananda College in the final to win their first silverware of the year.

Visakha Vidyalaya had a rough time at their usual playground, the All Island Schools Championship when they saw their under 19 team being knocked out in the semifinals by eventual champs Bishop’s College.

However, they came back strong to completely dominate proceedings in Kandy and collected double merriments in the tourney. In a surprising twist, Methodist College made their way into the final against the Visakhians.

The Blue and Yellow painted girls wasted no time in collecting their winnings as they swiftly walked into their second major title at the tournament. Bishop’s College met Ladies’ College in the third-place play-off and managed to save face with a win of 2 matches to 1.

Over in the boys’ category the Anandians claimed the Under 20 third place title when they received a walkover from S. Thomas’ after the 1st singles match. While the 3rd place match was concluded with clear winners, the much-awaited final was pushed by a day due to torrential rain.

Stay logged on to ThePapare.com for updates from the Boys’ Under 20 Final.