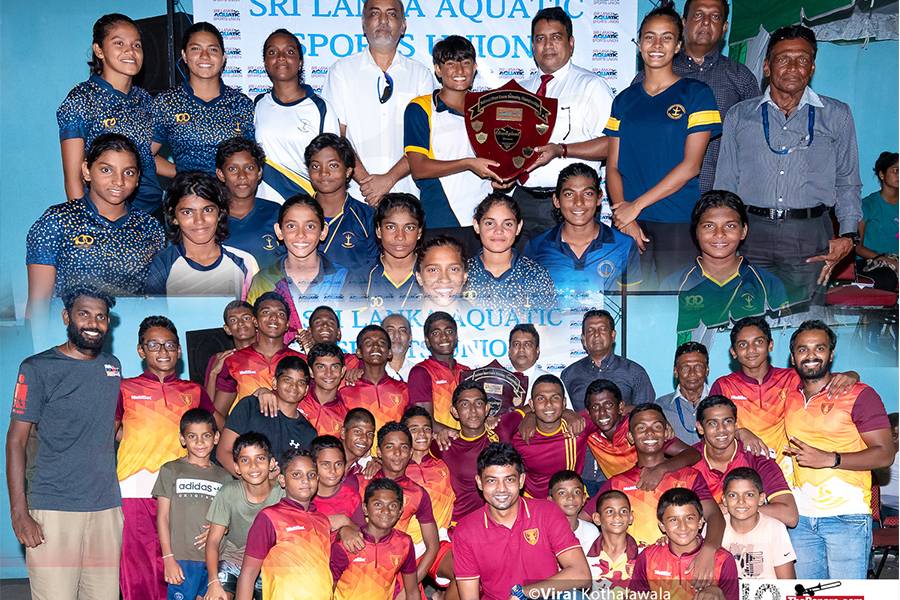 The first national level swim meet of the year, the National and Junior National Short Course Swimming Championship commenced on the 6th April at the Isipathana Swimming Complex with close to 1000 swimmers vying for titles.

The four days of competition has brought forth 35 new records in both the individual events and at the relays, with the final day bringing out 13 records in total.

Three new records came off the Boys U15 1500m Freestyle event with Yash Biren Peiris of Asian International School taking charge. He grabbed Gold in the event with a new record of 18:09.95 minutes while Senal Pathirathna of Ananda College (18:45.60) and Taha Anverally of EMS (18:46.40) came in second and third to also enter the record books.

Dasindu Perera of Ananda College shone in the Boys 100m Breaststroke with a close snatch of the record with a timing of 1:12.59 minutes to grab Gold. The previous record was held at 1:12.65 minutes.

Oneli Yahampath of Lyceum International School Nugegoda won the Girls U15 200m Butterfly event with a timing of 2:40.01 min. This was more than enough to topple the previous record of 2:52.95min to enter the records.

Nabashie Perera seized her 4th record in the meet with a second-place finish behind Oneli in the Girls U15 200m Butterfly event. Her final timing of 2:51.89 min was all she needed to enter into the records alongside Yahampath.

Nisha Nilaweera won the Gold in the Girls U15 Freestyle event with a tight record breaking performance. Her final timing was clocked in at 28.27sec while the record she renewed was set at 28.55seconds.

Finally, rounding off the individual records of the day, Sandev Senarathne of Ananda College collected the Boys 200m Butterfly Gold medal with a close-call record on the side. He swam his final event in 2:07.40 min while the previous record was held at 2:07.77min.

5 more records were renewed from the team events. Starting off with the senior relay team of Visakha Vidyalaya snatching their 3rd record for the year in the Girl’s 200m Medley Relay. Their timing of 2:04.86min was enough to beat the previous record of 2:06.78min.

Another 3rd straight record came from the U15 Boys team of Lyceum International School Nugegoda, this time in the 200m Medley Relay. They came second with a timing of 2:06.06min.

Winning the Boys U15 200m Medley Relay was Ananda College with a splendid performance of 2:02.59min to take Gold.

With 5 Gold medals and 5 records, Hiruki De Silva of Gateway College, Dehiwala won the Girls U15 Individual championship with a total of 50 points. Nabashie Perera came in second with 46 points and Akithmi Wasalathanthri finished 3rd with 45 points.

Vanuka Kannangara of St. Joseph’s College won the Boys U15 Individual championship with 48 points to his name. Induwara Liyanage (46) and Chris Pavithra (44) came in second and third respectively.

It was Akalanka Peiris all the way in the Senior Boy’s Championship with a total of 50 points to his name. Sandevv Senarathne finished 2nd with 45.50 points while Dilanka Shehan came in third with 45 points.

The overall team scores for the year 2019 were as follows: 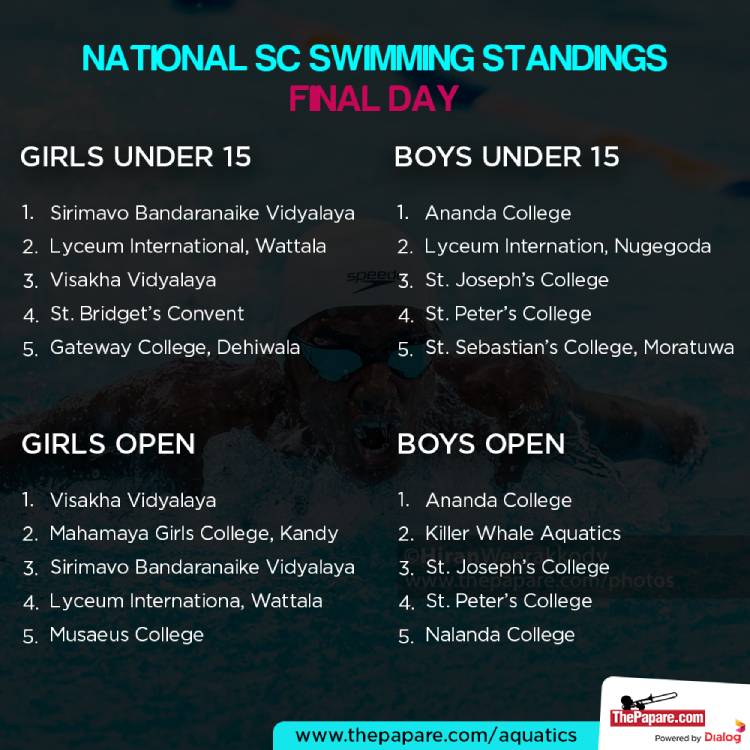