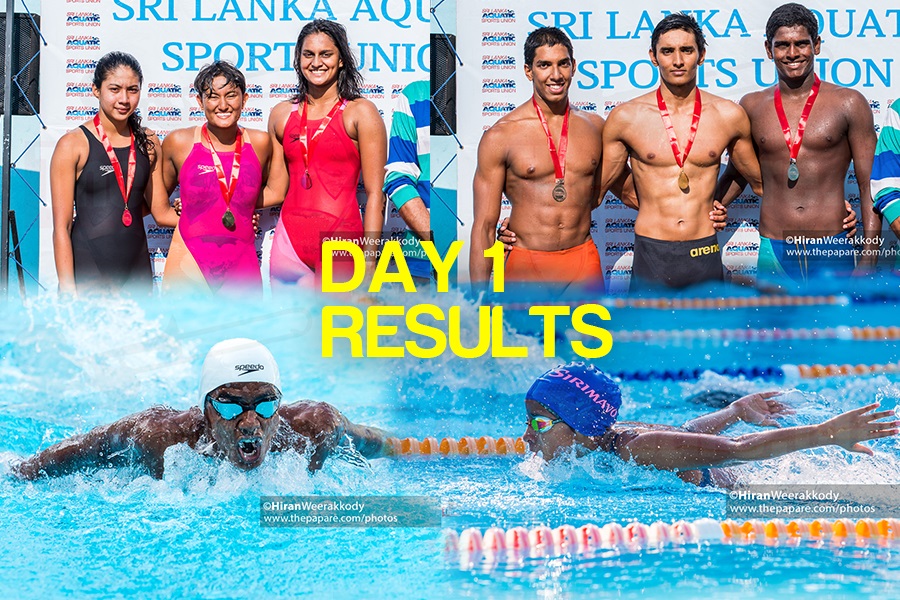 A spectacular show was brought out by the girls on day 1 of the National and Junior National Short Course Swimming Championship, which commenced today at the Isipathana Swimming Complex.

Isipathana to take on 800 National prospects

The race for national selections begins with the National and Junior National Short Course Swimming Championship….

The National Short course swimming championship 2019 kick started today with over 800 participants vying for medals and National ranking points in the shorter format of the game (25m).

The competition started off with the Under 15’s and Open categories hitting the pool first. Hiruki De Silva of Gateway College Dehiwala and Nabashie Perera of Sirimavo Bandaranaike Vidyalaya shone with two records each in the Girls Under 15 category while the relay team of Visakha Vidyalaya also broke the record in the Girls 400m Medley relay.

Hiruki De Silva won gold in the Girls under 15 200m freestyle event; She qualified for the final with a solid 5:00.70 and drove it home with a 4:56.12 minute swim in the final. The previous record in this event was held y A Kalyanasundaram of Lyceum International School Wattala with a time of 5:00.63 minutes.

Hiruki later went on to grab her second gold and second record for the day by winning the Girls U15 200m Individual Medley. Qualifying with a timing of 2:38.80 she swam her finals in 2:34.86 minutes to wipe out the previous record of 2:37.80 min held by Ramudi Samarakoon.

Hiruki’s efforts helped her alma mater, Gateway College Dehiwala earn 20 points on day 1 and finish 2nd at the end of the day.

Nabashie Perera of Sirimavo Bandaranaike Vidyalaya took home gold in the Girls U15 100m Butterfly event with a record breaking performance of 1:09.79 minutes. Nabashie also held the previous record which she established at the 2018 meet with a time of 1:11.15minutes.

Perera finished behind Hiruki De Silva in the Girls U15 200m IM event to grab silver while making sure her timing also bested last year’s record. While the record was at 2:37.80 minutes, Nabashie’s final timing of 2:36.37 minutes was just enough to put her in the record books.

18 points from her and with the help of her teammates, Sirimavo Bandaranaike Vidyalaya tops the leaderboard with 29 points after day 1.

Vanuja Kannangara of St. Joseph’s College won his school 20 points with two first place finishes in the Boys under 15 category. He won the Boys U15 400m Freestyle with a time of 4:33.65 minutes and the 200m Backstroke clocking 2:25.40 minutes.

The ‘A’ team of Visakha Vidyalaya started the relays strong, smashing the Girls 400m Medley relay record previously held by Killer Whale Aquatics. The Visakhians swam a close 4:40.08 minutes to grab gold while Sirimavo came in second with a time of 4:54.61 minutes.

While the KWA Girls lost their record, Ananda College stole Gold from the Killer Whale boys in the 400m Medley Relay. Although the Anandians fell short of the record time, they clocked in 4:02.98 minutes to grab first place in the event.

St. Joseph’s College finished day 1 on top of the leader board with 37 points. Lyceum International Nugegoda and Ananda College finished second and third with 23 and 22 points respectively.

More action from the National and Junior National Short course swimming championship will unravel tomorrow, 7th April. Stay logged on to ThePapare.com for results, photos and records from the competition!