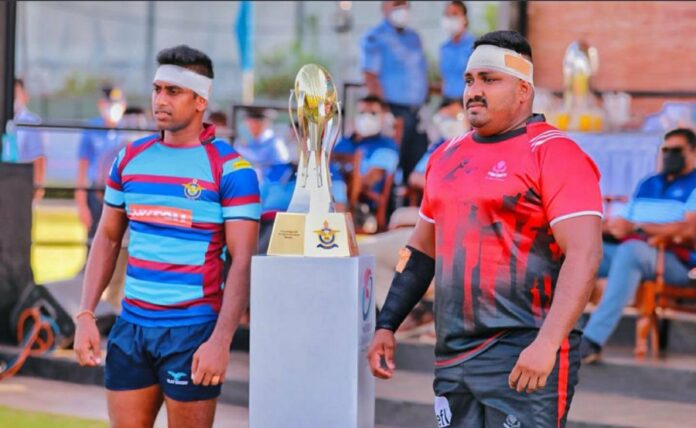 Rugby returned from the wilderness after a lapse of 18-month as Air Force failed to hang-on on their home paddocked as Thenuka Nanayakkara booted CH & FC to victory — 21-23 — in the first leg of the Commanders Cup match played out today (13th August 2021).

The home team kicked off proceedings on a sunny evening at Rathmalana as Rugby finally returned to the delight of all players, officials and all-important fans.

Gayantha Iddamalgoda kicked the first points of the evening as the visitors were penalized early on for breaching the offside line. The pivot from the home team pierced the uprights, giving his team the early advantage (AF 03-00 CH).

The lads from Maitland Place responded fittingly as returning half-back, Sudam Sooriyarchchi snipped from close range following a bit of razzle-dazzle from his fellow three-quarters.

Youngster Thenuka Nanayakkara booted over the extras as CH took the lead for the first time in the game, displaying their intentions to play early on. (AF 03-07 CH)

Gayantha Iddamalgoda reduced the lead, however, Nanayakkara managed to maintain a 75% kick success off the tee — kicking 3 out of 4 — as the visitors went into the break with the lead as any signs of nerves subsided, helping them find their grove.

CH started the second half from where they left off as five-eighth Rohitha Rajapakse scored beside the upright following some strong work from the visiting forwards. Nanayakkara added the extras to put further daylight between the sides. (AF 06-20 CH)

Air Force huffed and puffed, finally catching the game by the scruff of its neck, mauling their way to the whitewash as the visitors’ defence was breached for the first time in the game.

Parakkrama Rathnayake was the beneficiary crashing his way over from the tail of the maul to cut the deficit. The scorers remained the same as Iddamalgoda surprisingly failed to add the extras. (AF 11-20 CH)

Anjula Hettiarchchi scored similarly to Rathnayake before Perera’s yellow to cut the deficit. Iddamalgoda made it a 2-point game with 20-minutes to go in the first game following the countries continued to battle with Covid-19 which left Rugby and many other sports in the wilderness. (AF 18-20 CH)

Nippy five-eighth, Iddamalgoda sent Air Force into the lead for just the second time in the game with less than 5-minutes on the clock as Fatigue and niggle crept into the CH ranks, leaving the visitors searching for intervention.

With the hooter gone, CH chanced their arm, winning a scrum in the Air Force half. The resulting scrum, yielded a penalty for CH as one final hurrah from the visiting pack secured Nanayakkara with a chance to win the game off the final kick of the game. On his debut, the former Peterite centre made no mistake off the tee, grabbing a scintillating victory for the visitors in the first leg of the Commander’s cup.

The second leg is scheduled to be played out on the 30th of August at the same venue, leaving the Commander’s cup up for grabs.

ThePapare.com Player of the Match: Thenuka Nanayakkara (CH Outside Center)