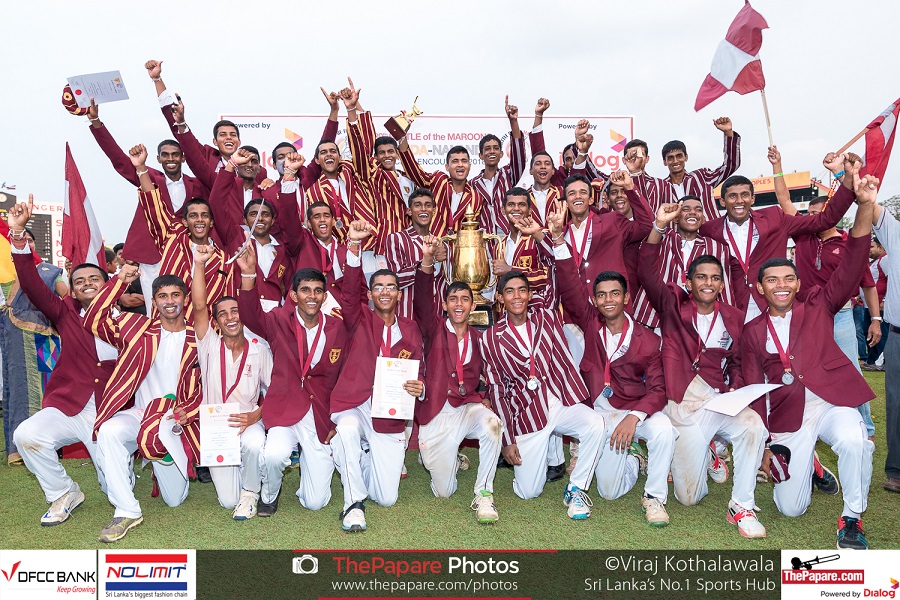 Nalanda College will have to wait for one more year if they are to end their winless run in the Battle of the Maroons, as their search for a win as the 89th Battle of the Maroons was unsuccessful as the game ended in a tame draw today (4th March) at Sinhalese Sports Club grounds.

Nalanda continued from there they left off through captain Lakshitha Rasanjana, as the left hander made maximum use out of the opportunity along with youngster Raveen De Silva.

However, De Silva was the first to be dismissed on day two as the score read 167, soon after Captain Rasanjana reached his half century.

Kalana Kathriarchchi came and went for 1 as Rasanjana stepped on the accelerator, scoring with intent. Maheema Weerakoon joined Rasanjana, however, the Nalanda captain perished by the sword for 72 off 122 deliveries which included 8 fours and a solitary six.

Weerakoon remained unbeaten on 20 as last man; Umeshka Dilshan was the final wicket to fall on the stroke of lunch as Nalanda gained a handy lead of 72 runs.

Kanishka Ranthilakage and Kavindu Gimhana came out to bat following lunch with their backs against the wall as Nalanda College had a slight edge going into the second session. The opening pair saw through 5 overs, however, Gimhana fell for 10 off 17 balls as Nalanda were given a sniff in the game.

The surface at Sinhalese Sports Club got better for batting as the second day progressed. Ranthilakage was joined by Dushan Hettige as the two top order batsmen made up for missing out in the first innings, putting on 23 runs for the second wicket.

Ranthilakage fell for 25 as Hettige and Kamesh Nirmal – Brother of Dinesh Chandimal – put on a 37 run partnership for the third wicket, as Ananda wiped off the Nalanda lead of 72 runs, taking the game into safe territory.

Hettige was the third to fall, as he was trapped in-front for 23 off the bowling of Kaveeesha Tharusha. Captain Asel Sigera combined with Nirmal in a partnership of 75 runs as the game headed into a tame draw.

Suhanga Wijewardana bags 6 as Nalanda edge ahead on day 1

Suhanga Wijewardena bagged 6 for 52 crippling the Ananda batting; however, the Maroon and Golds…

Captain Sigera fell short of a half-century for 46 off 61 balls as the hero from the first innings joined Nirmal at the crease as the duo put on a 74 run partnership.

Nirmal reached his century as bad light intervened and the game was brought to an abrupt end as the Ananda second innings ended at 252 for the loss of 7 wickets.

Nalanda College’s wait for glory at the big match continues. However, Ananda College will be pleased with the recovery in the second innings to save the game and retain the Dr. N.M Perera Memorial Challenge Trophy.