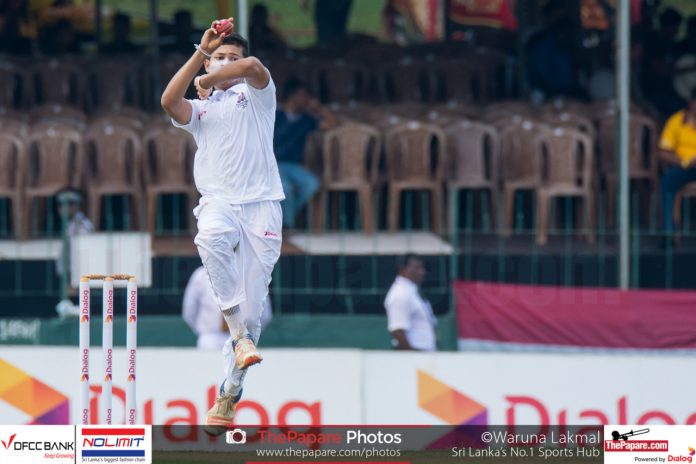 Suhanga Wijewardena bagged 6 for 52 crippling the Ananda batting; however, the Maroon and Golds recovered to end day one, with Nalanda tottering on 101 for the loss of 5 wickets in the 89th Battle of the Maroons, played at Sinhalese Sports Club.

After winning the toss and electing to bowl first on a surface with grass, Nalanda made early inroads with some potent seam bowling. It took just five overs to get their first breakthrough as Kanishka Rathnayake was the first to be dismissed off the bowing of Chamindu Wijesinghe for 10 runs off 16 balls.

The first wicket opened the floodgates for Nalanda as they managed 4 further wickets in quick time, crippling the Ananda batting, reducing them to 36 for 5.

Lahiru Attanayake began the rebuilding phase as he, along with Shamal Hirushan put on 22 runs for the 6th wicket. Hirushan was the next to fall as he was dismissed by Chamindu Wijesinghe as wickets kept tumbling.

One wicket brought about two; Reshan and Gihan Vishwajith were dismissed as Ananda College were reeling at 109 for 8.

Chamika Gunasekara joined Attanayake at the crease as the tail ender provided vital support to the set batsman.

Attanayake went past the 50-run mark as his tireless effort took Ananda score towards 150, however, once Attanayake was caught at cover point for 58 off the bowling of Wijewardena, the Ananda innings came to an end at 141 as Deneth Nissanka was dismissed for a duck, 4 balls into his innings, handing Suhanga Wijewardena his sixth wicket.

Chamindu Wijesinghe was the only other bowler with wickets as he ended with figures of 4 for 33 as the opening bowlers bundled out Ananda College within two sessions of play.

Nalanda College themselves did not get off to the best possible start, losing opener Rusiru De Silva for just 1 run as he was dismissed by Deneth Nissanka.

Dilhara Polgampola joined opener Avishka Perera as the duo put on 40 runs for the second wicket. Polgampola was the next to fall for 23 as he was bowled off the bowling of Shamal Hirushan.

That wicket brought about two more as Nalanda seemed to be in a spot of bother at 57 for the loss of 4 wickets.

Chamindu Wijesinghe joined Captain Lakshitha Rasanjana at the crease as the two middle order batsman put on 43 runs for the 5th wicket, taking Nalanda towards the Ananda total.

Wijesinghe was the final wicket to fall on day one, as he was dismissed off the bowling of Gishan Vishvajith for 18 runs.

His wicket put the brakes on captain Rasanjana as he shut up shop, bringing the curtain down on day one, which saw 15 wickets fall.

Stay logged on to ThePapare.com for day two of the 89th Battle of the Maroons which is scheduled to begin tomorrow (4th March) from 9am onwards.