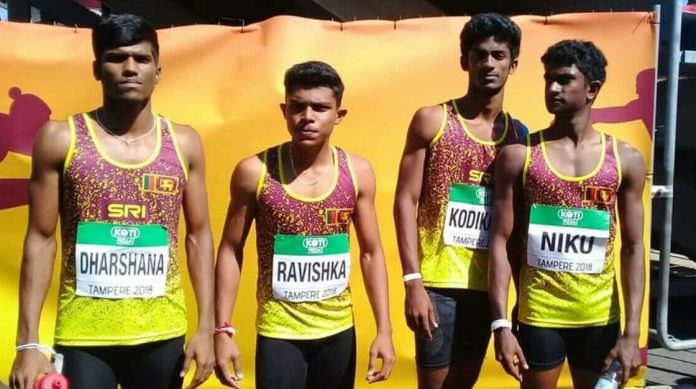 Sri Lanka’s medal hopes at the IAAF World U20 Championship is still alive with the Men’s 4X400m team advancing to the final on provisional qualification as one of the fastest losers while the Women’s 4X400 quartet failed to qualify to finish last in their heat.

It’s a remarkable achievement by the Young Sri Lankan men’s quartet who became the first Sri Lankan team to make it to a Relay final in the World stage.

Asian Champions, Sri Lankan men’s U20 4X400m quartet was drawn into the final heat of the three heats in the event alongside USA and France who were the favorites for the first two spots and gained automatic qualification to the Final. Running in lane 5, Pasindu Kodikara gave Sri Lanka a good start managing to finish the opening lap on par with the American, French and the Zimbabwean athletes.

Pabasara Niku who was entrusted with the responsibility of running the second lap lost the early advantage as he failed to capitalize on the good start by Pasindu as he fell to fourth place with Team USA in the lead and France and Zimbabwe in second and third places respectively. Benedictine Ravishka Indrajith running the third lap once again delivered in style as he managed to close down the gap between the front pack and managed to hand over the baton to Aruna Darshana for the anchor lap in a competitive position. Aruna had a brilliant start to the final lap as he managed to bring Sri Lanka into second place keeping them alive in the competition. French anchor runner Lidji Mbaye and Aruna had a battle for the second place in the home straight with the Frenchman managing to get the better of the Lankan quarter miler by 0.18 secs. Team USA took the win in the race clocking 3:05.57 with the French taking the second place while the Sri Lankan foursome was placed third with a time of 3:08.88.

Sri Lankan U20 men’s team went through to the final as the second fastest losers behind Germany and had clocked the sixth best time ahead in the overall timings ahead of Belgium. In final Sri Lanka has been drawn to lane 01. Pasindu Kodikara who shoulders the responsibility of giving Sri Lanka a good start will have to work hard in order to make sure that the Island nation has a good opportunity of making it to the podium. 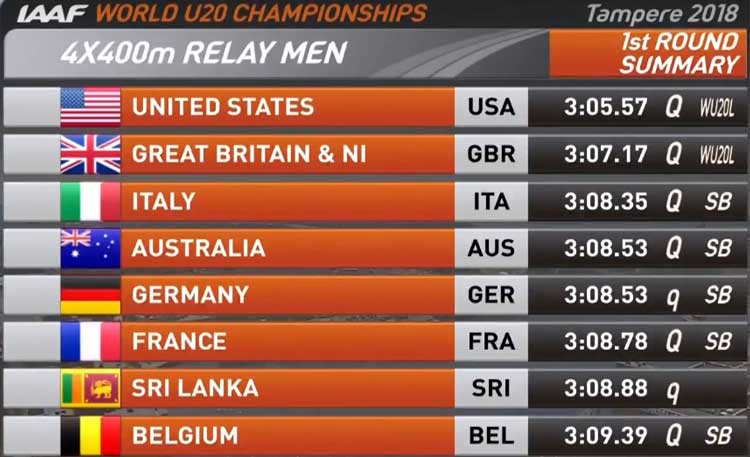 Sri Lankan Women’s U20 team was dealt with a hard hand as their regular second lapper Sachini Divyanjalee did not take part in the first round, having been down with fever for the past three days. Sandumini Bandara who was the standby on tour replaced Sachini, Sri Lankan women who competed in the second heat of the first round was placed last with a disappointing time of 3:51.02 which was far from the seasonal best time of 3:43.31 which was recorded at the Asian Junior Championship.