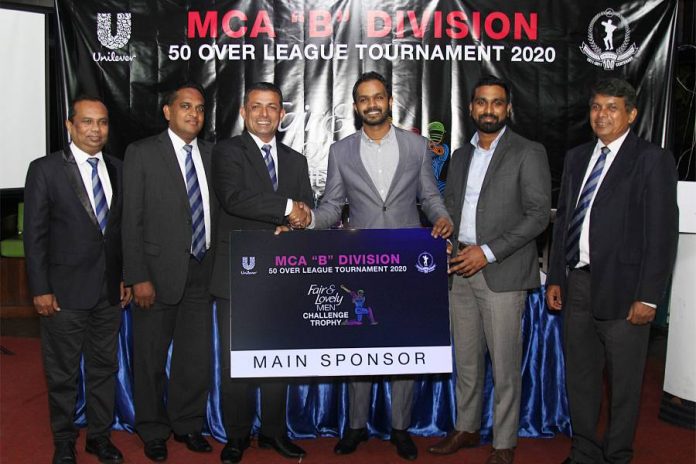 The 03rd Fair & Lovely Men – MCA “B” Division League Tournament 2020 will be even fairer & lovelier for the cricketers, as the tournament comes around on the 05th of October 2019.

The tournament will be conducted with all the paraphernalia attached to an ODI  (colored clothing, white ball etc. ) for the third consecutive year with a few new frills attached to it by the sponsor Unilever Sri Lanka.

Out of the 7 teams that has confirmed participation, 3 teams are new, namely, Asia Asset Finance, Pyramid Wilmar (coming up from the MCA division “C”) & MAS Silueta (Coming down from MCA Premier League 2019)

The Tournament will be concluded on a league basis in 02 stages. The round robin, containing 21 matches will commence on 5th October and will go on till 27th October 2019.

At the completion of the round robin stage, the 4 top teams in the points table will advance to the final round.

The final round matches will be conducted on 02nd November and the Final on 09th November 2019.

The Official Ball: The same used for the MCA Premier League – the Grays of Cambridge (Pakistan)  “Cavalier” white ball, directly imported by MCA from Pakistan, supplied to the teams at cost.

Flash back to 2018 Season: In the Final played on 18th November 2018 at the MCA Grounds, JKH “B” lifted the brand new Fair & Lovely Men Trophy, beating Kanrich Finance “B” by 7 wickets.