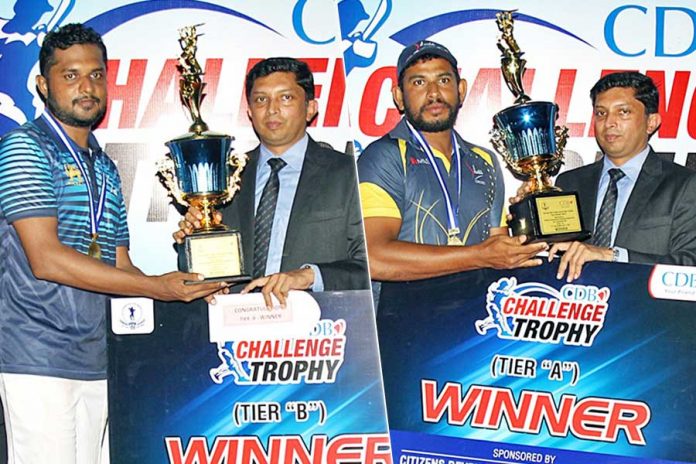 MAS Silueta and Sri Lanka Telecom emerged champions of tier ‘A’ and tier ‘B’ respectively at the CDB-MCA Cricket Sixes tournament which concluded on the 1st of September at the MCA Grounds.

The annual six-a-side tourney organized by the Mercantile Cricket Association was played over 30th, 31st of August and the 1st of September at several venues around Colombo.

Shehan Fernando of MAS Silueta stole the limelight with his exciting stroke play as the right-hander took his team over the line with ease, scoring a cracking 33 runs.

LB Finance ‘B’ scored 70 runs for the loss of 4 wickets in their allotted 5 overs. Angelo Perera top-scored with 25 runs. MAS Silueta won the game with an over to spare.

In tier ‘B’, Sri Lanka Telecom had to face Maliban Biscuits, whom they defeated by 6 runs in the final.

Isanka Siriwardena of Sri Lanka Telecom stole the show completely in the second tier as he managed to grab 4 awards in the tournament.

He top-scored in the finals with 30 runs to help Sri Lanka Telecom post 75 runs in their quota of overs.

The bowlers of Sri Lanka Telecom did a great job too by restricting Maliban Biscuits to just 67 runs in a game which went to the wire.

Siriwardena was named the Best Bowler, Man of the Final, Man of the Tournament and also won the award for most sixes.

Mithun Jayawickrama of UB Finance was adjudged the Best Batsman.

Malik, Hafeez not picked in probables for Sri Lanka series