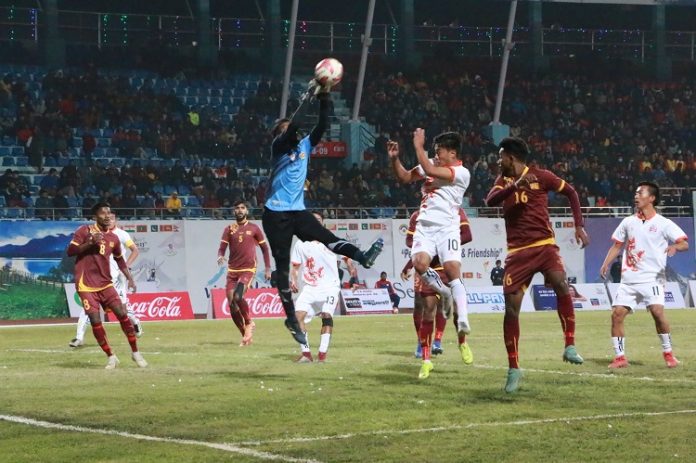 Imperious Bhutan ran ragged past a destitute Sri Lanka with the scores reading 3-0 in Men’s Football at the 13th South Asia Games 2019 in Kathmandu, Nepal.

Sri Lanka came into the game with two draws and desperately needed a win to have a chance of finishing with the bronze medal.

Sri Lanka had the early opportunity in the first few minutes when Mohamed Fazal’s cross between the backline and goalkeeper found an unmarked Mohamed Aakib, but his first time effort was straight at the goalkeeper from point blank range.

Sujan Perera was forced into a double save after Bhutan broke free down the right wing and struck a fierce shot and headed the rebound.

After back and forth action it was Bhutan who took the lead in the 19th minute. Chimi Dorji headed in brilliantly from a corner leaving Perera no chance. Thereafter, Bhutan missed a few chances to extend the lead with Perera being at his usual best.

Sri Lanka created one of their best chances in the 34th minute after Fazal’s run and cutback from the right found Chamod Dilshan but his effort was blocked away by the defense. Then, a hopeful looping ball was tipped away by the Bhutanese goalkeeper for a corner while Bhutan squandered a couple of opportunities towards the end of the first half.

An early chance came Bhutan’s way as the Bhutan forward was gifted the ball but as he tried to take the shot it took a deflection and rolled past the goalkeeper and the upright. Sri Lanka got a free-kick on the hour mark but Fazal’s effort was straight at the wall.

Bhutan scuffed a chance but were awarded a penalty soon after when Jude Suman made a reckless foul inside the box. Dawa Tshering drilled the penalty to the top corner to make it 2-0 for Bhutan.

Perera made another brilliant save off a free-kick to deny another goal but was left helpless as poor defending allowed Yeshey Dorji to score the 3rd in the 80th minute.

Towards the end Sri Lanka got a couple of chances with Sasanka Dilhara firing a volley just past the upright while Sri Lanka’s performance was defined when they missed an open goal with the last play of the match.