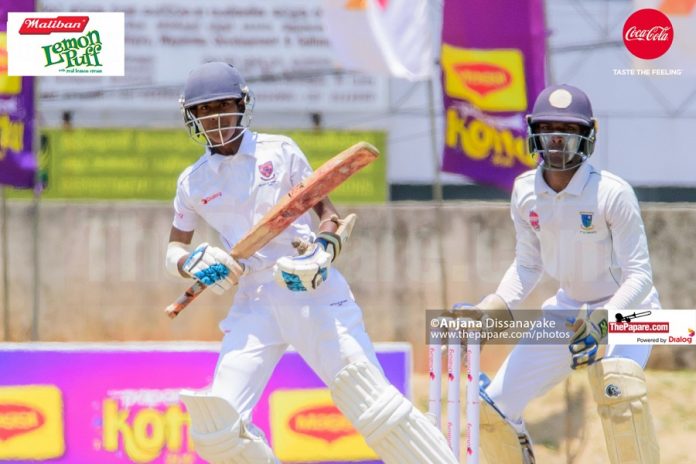 The 37th Battle of the Rocks annual encounter between Maliyadewa College, Kurunegala and St. Anne’s College, Kurunagala was commenced today (13th March) at the Welagedara Stadium, Kurunegala as the Devans dominated the day thanks to a brilliant century by Matheesha Weerasinghe.

St Anne’s College won the toss and asked their rivals to bat first hoping for early inroads, but it wasn’t to be. Opener Matheesha Weerasinghe smashed a high-class ton to dent the opposition’s plans as he and the rest pushed Devan’s first innings score to 331 at stumps.

Maliyadeva College lost 6 wickets during the day 01 play as Kavindu Ranasinghe picked up 2 wickets to lead the wicket column.

Assisting Matheesha, another Weerasinghe, Gayan notched up an attacking half-century while Ishara Munasinghe and Chulaka Athapaththu missed their fifties by 7 runs.

The first player to breach 1000-runs this season, Muditha Premadasa, captain of Maliyadeva College couldn’t shine in the biggest match of his season as he was dismissed for just 26.

The Devans are riding high on confidence stepping into day 02, with 4 wickets in hand. The 2nd day of the match will start tomorrow (14th March) at 9.30 am at Welagedara Stadium.

The 25th Annual Limited Overs Cricket Encounter between Maliyadeva College and St. Anne’s College will be played on 15th March at the same ground and you can watch the Live action unfold on ThePapare.com from 9.30 am onwards.

Keep it logged onto ThePapapre.com for all the updates, live scores and Match articles of the 37th Battle of the Rocks.