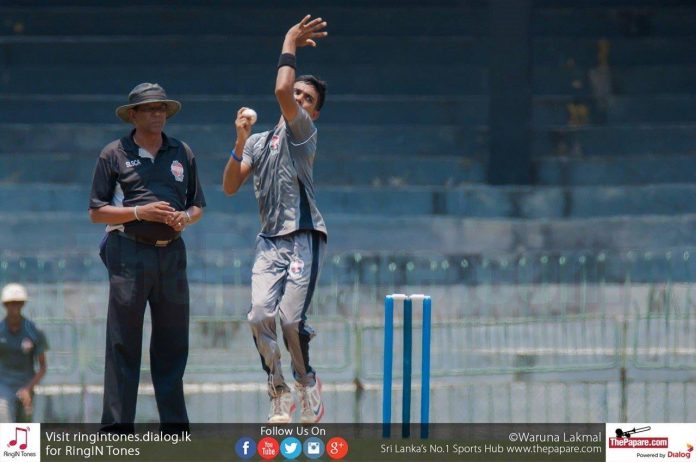 The final group stage match of Sri Lanka’s premier U23 Club Cricket tournament was worked off on Friday (08th) at the SSC Grounds with the home team demolishing their opponents Ragama Cricket Club registering an innings victory. After the conclusion of the group stage encounters, the tournament now moves towards the knock out stages with the Quarter Finals of the tournament scheduled to commence on 12th November.

Three games of the Sri Lanka’s premier U23 Club Cricket tournament were worked out today, across….

After winning the toss, the SSC skipper Krishan Sanjula opted to bat first with Sohan de Livera and Avishka Senadeera opening the innings. They put on a 39-run stand for the first wicket before Livera was dismissed by off spinner Nishan Peiris for 28 runs. The number three batsman Akash Senarathne then joined Senadeera at the middle and built a 43-run stand which was the highest partnership of the innings.

Senadeera ran himself out in the 40th over after scoring 41 runs off 104 balls with 3 fours. Senarathne looked impressive in his short stay at the crease but threw his wicket away for 27 runs off 30 balls with 5 fours. After their dismissals, no one could steady the innings as they lost the remaining 8 wickets for just 117 runs. The skipper Krishan Sanjula made 27 runs off 49 balls while Sri Lanka U19 cap Pasindu Sooriyabandara stroked 25 runs off 45 balls.

Tall lanky off spinner Nishan Peiris was the star performer with the ball for Ragama as he picked up 5 scalps for 51 runs. The other off spinner Kalhara Senarathne grabbed 4 wickets for 68 runs giving good support at the other end.

In reply, the visitors got off to a terrible start as they lost the first 4 wickets for just 7 runs. However, Sanjula Bandara and Kalhara Senarathne tried to rescue the innings but it was not enough as they were bundled out for just 86 runs in 31.3 overs. Senarathne was the top scorer for the visitors scoring 34 runs off 49 balls with 5 fours. Bandara chipped in with 26 runs off 95 balls including a boundary.

Akash Senarathne (3/16) and Taneesha Weerakoon (3/40) starred with the ball sharing 6 scalps between them. After being asked to follow on, the visitors had to show a much improved batting performance in the second innings to get a result in their favor but it was not the case as they were uprooted for just 82 runs in 28.3 overs.

Former Peterite off spinner Taneesha Weerakoon and Akash Senarathne starred again with the ball taking 9 scalps together. Weerakoon picked up 5 wickets for 38 runs while Senarathne grabbed 4 wickets for 25 runs.