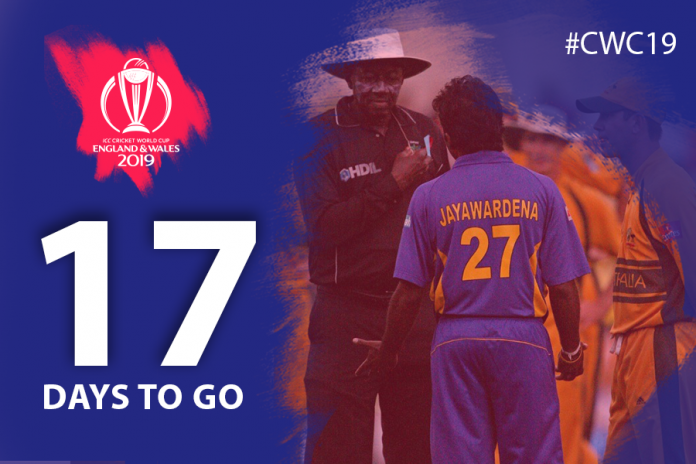 Perhaps the most disappointing World Cup so far was the one held in the Caribbean in 2007. The tournament was too long and there were far too many one-sided games. The overpriced tickets resulted in fewer spectator turn outs and the death of one of the finest cricketing brains – Bob Woolmer, Pakistan’s Head Coach, further soured the mood of the tournament.

Sri Lanka and Australia qualified for the finals. The Aussies were on a high, chasing a grand triple having won the 1999 and 2003 competitions comfortably. Their win in 2007 came amidst farcical scenes after the umpires misinterpreted the playing conditions.

The game had been reduced to 38 overs each due to rain and thanks to Adam Gilchrist’s blistering 149, Australia posted 281 for four.

Read More : When Dilhara did a Thomson

To score at 7.5 runs an over was going to be a tough ask against a quality attack but Sri Lanka had their chances as Kumar Sangakkara and Sanath Jayasuriya added 116 runs for the second wicket. With the rain fast approaching, in a bid to stay ahead of the Duckworth Lewis par score, both batsmen were dismissed in quick succession trying to improvise.

Sri Lanka were 149 for three in 24.5 overs when rain came down and they were given a revised target of 269 in 36 overs. Later, when bad light stopped play, there were still three overs remaining with Sri Lanka on 206 for seven.

Most journalists in the press box had gone back to write their copies knowing too well that the game was over and Australia had won as only 20 overs were needed to be bowled to complete a game. But the umpires were insisting that three more overs were remaining and that the players would have to come back the following day (the reserve day) to complete the game.

It was a day when a lot was happening back in Colombo. Underworld kingpin Prince Collum had been a prime target of STF Commandant DIG Nimal Lewke and having meticulously observed his movements for months, Lewke gave his officers the go ahead to infiltrate Collum’s hideout and gun him down. It was also the day, the LTTE carried out a daring air raid over Colombo. Amidst all that, the World Cup final was being held up by the umpires in Barbados.

This was not an ordinary team of match officials. The on-field umpires were Steve Bucknor, standing in a record fifth World Cup final and Aleem Dar, who had an extraordinarily high correct decisions rate. The third umpire was Rudi Koertzen while Billy Bowden was the reserve official. A former Test captain Jeff Crowe was the Match Referee.

Most couldn’t believe what was going on that evening in Barbados. Naturally Ricky Ponting was surprised too. “I thought he was having a joke to stop our celebrations,” Ponting said, having heard Dar say wrongly that the game still had three overs to go. “We stopped and looked at him and I said, ‘Look mate, we’ve played the 20 overs, we’ve finished the game.'”

“Before we went back out to the middle, I tried to explain to the third umpire, but he had already made his decision,” said Mahela.

Read More : The hundred in a losing cause in a World Cup final

If everyone had to turn up on the reserve day to finish just three overs, it would have been comical. Mahela agreed to send down his batsmen to face the three overs in total darkness. Ponting repaid the complement by saying that he was going to bowl spin.

All five match officials were suspended for the next ICC event which happened to be the World T-20 in South Africa later that year.

ICC boss Malcolm Speed didn’t mince any words when he said, “It would have been easy to let sleeping dogs lie and pretend nothing happened,” said Speed. “But the reality is that the playing control team made a serious and fundamental error that caused the final of our flagship event to end in disarray and confusion.”