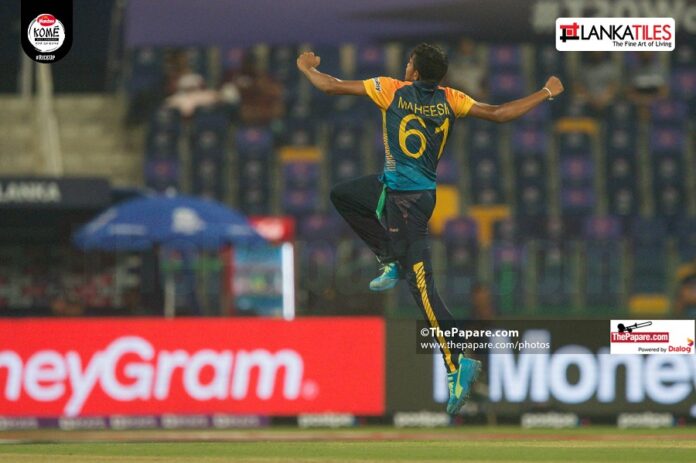 The 21-year old Sri Lankan Mystery spinner Maheesh Theekshana has been a revelation so far in the ICC Men’s T20 World Cup 2021, picking up 6 wickets in 2 games to lead the charge with the ball.

Making his international debut little over a month ago, Theekshana has been relied on by skipper Dasun Shanaka to bowl inside the powerplay and has picked up wickets in the first over he bowled in each game.

“I am really happy. We were under lots of pressure coming into the tournament since we had to play the qualifiers, even though we are a good side. The important thing is players started believing in their abilities and they back themselves to perform.” Theekshana said after the Ireland game in Abu Dhabi.

A few years ago, Theekshana was discarded from selection for the Sri Lanka U19s due to fitness concerns. He was overweight and failed the skin-fold test conducted by Sri Lanka Cricket.

Read: The survival of the Mysterious Maheesh

However, since joining Sri Lanka Army last year, Theekshana has maintained a strict diet and worked on his fitness, which has paved the way for his superb start in international cricket. Despite wide-spread criticism on Sri Lanka’s diluted first-class cricket system, Sri Lanka Army has contributed heavily towards the betterment of the game in various ways.

“There are about 150 cricketers in the Army. So the competition level is very high. We have our own T20 league (Army Commander’s Cup) and that helped me find a place in the LPL. There’s a huge support from them for young cricketers. We can train at anytime as the facilities are readily available for us. We were in the T20 finals in the domestic tournament and reached the semi-finals in the one-day tournament. This shows how much support Army has given to uplift the game of cricket.”

Former Benedictine, Theekshana, who emulates the action and the variations of former Sri Lankan spinner Ajantha Mendis, has constantly worked with his mentor, who is working currently as the Spin Coach at Sri Lanka Cricket. Incidentally, Mendis, who took 288 wickets for Sri Lanka also represented Sri Lanka Army during his playing career.

“He [Ajantha Mendis] was my first coach at Army when I joined their U-23 team. He has been very supporting to me, giving advice to me on what to and what not to do. He’s been in constant touch with me.”

Theekshana received massive support from his skipper at Sri Lanka Army, former Sri Lankan all-rounder Thisara Perera and his senior team-mate, Dinesh Chandimal. Both Perera and Chandimal signed up for Sri Lanka Army a couple of years ago to revive their careers.