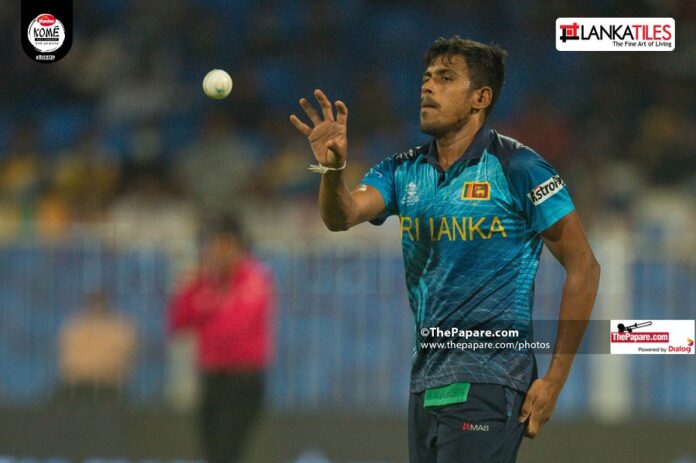 21-year old ‘Mystery’ spinner Maheesh Theekshana is set to miss Sri Lanka’s first clash in the Super 12 round of the ICC Men’s T20 World Cup 2021 against Bangladesh in Sharjah on Sunday.

Theekshana, Sri Lanka’s top wicket-taker so far in the competition, with 8 scalps in 3 games, has picked up a side strain during the Netherlands game on Friday having bowled only one over. In that solitary over, he picked up two wickets.

He left the field soon after bowling that over and never returned to the field. He was seen walking around after the game but the physios are set to take precautionary measures and rest for a couple of days thus missing the Bangladesh clash.

“The physios have said the decision might be probably to leave him for the next game,” Bhanuka Rajapaksa, the middle-order batter, said on Friday evening. “We don’t want to risk it by playing him and then him not playing in the rest of the series. For the moment he will be missing the next game as far as I know. It’s not 100% decided yet, but most probably, he will miss the first game and then play the rest of the games.”

If Theekshana is ruled, Sri Lanka could bring in off-spinner Akila Dananjaya in his place as a direct swap. Sri Lankan bowling attack remained unchanged for the Round 1 clashes against Nambia, Ireland and Netherlands in which the bowlers dismissed their opponents for 96, 101 and 44 respectively.

“I don’t think this injury [Side Strain] will last for too long. But, he is most likely to be rested for this game. However, we’re trying our best to get him back to full fitness. “ Shanaka said.

Sri Lanka’s fixtures in the Super 12 round