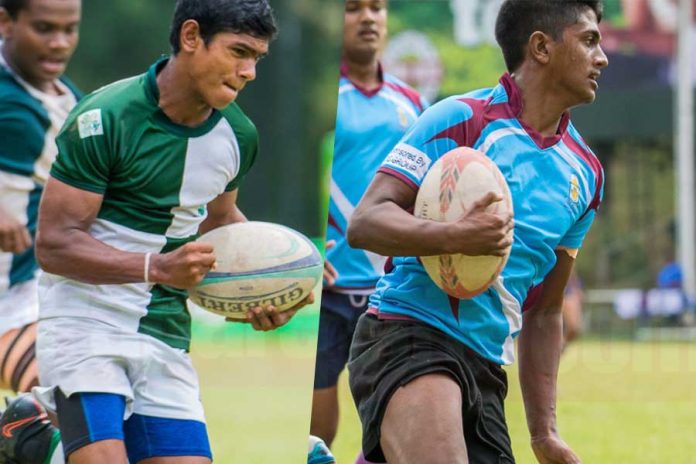 Mahanama College and Lumbini College stunned rivals and group favorites Zahira College and St. Anthony’s College as they booked their Cup quarter-final spots on day one. St. Peter’s, Trinity, Wesley, Royal, Isipathana and St. Joseph’s were the other group leaders to make their way into the Cup quarters, in the Under-14 Ten-a-side rugby tournament played at Sugathadasa Stadium Colombo.

Thirty teams divided into 6 groups of 4, and 2 groups of 3 took the field on day one as the junior rugby season intensified.

The first group of three saw St. Peter’s College winning ‘group A’ as the kids from Bambalapitiya defeated Nalanda and Kingswood successfully, with the 4th team S. Thomas’ Matale not present at the tournament.

Mahanama College were the surprise package in ‘group B’, as the youngsters managed to get the better out of Carey and Ananda, and also defeating Zahira by a slender 3 point margin to win the group and book a Cup quarter-final spot.

‘Group D’ witnessed the favorites from Kandy, St. Anthony’s College face a tough defeat at the hands of Lumbini College who held on for a 5-point win, taking a surprise top spot in the group.

Royal College were pushed by Vidyartha College who fought hard till the final whistle. However Vidyartha failed to breach the usually strong Royal defensive wall, and the lads from Kandy had to be satisfied for second spot in ‘group F’, while Royal won the group.

DS Senanayake College was the only team to pose a threat towards Isipathana College as the DS boys drew with Isipathana in their ‘group G’ fixture. However a superior point difference meant the Green machine progressed though, leaving the DS lads disappointed.

In ‘group H’ Science College posed a threat towards St. Joseph’s College. But the boys from Maradana overcame the Science lads to win, ending the day in horrible lighting conditions unsuitable for rugby.

Day two is scheduled to begin at 9am tomorrow at the Sugathadasa Stadium for the business end of the tournament.

Sri Lanka women fly to Bhutan for SAFF U15