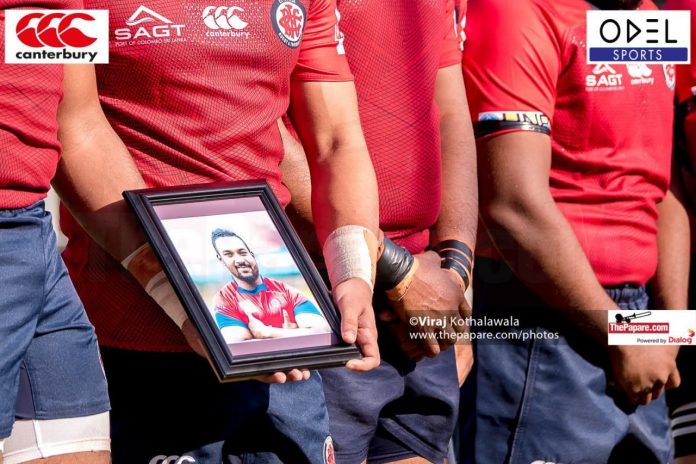 The early hours of December 30th surfaced with horrifying news that shocked the entire rugby fraternity of the country; the tragic death of the beloved Kokila Sammandaperuma aka ‘Marco’.

An unexpected turn of events resulted in the demise of a cheerful, friendly and humble individual of the sport. The CR & FC prop forward was an enthusiastic character on the rugby field and the tragic news was hard to digest for many in the rugby fraternity.

To honour their fallen mate, the CR & FC team retired Kokila’s #1 jersey for the season. A simple remembrance ceremony was held before the second round kicked off on Saturday(5th) at Longdon Place, where the family members of Kokila were handed over the number 1 jersey.

In the absence of skipper Kavindu Perera, Tarinda Ratwatte and Omalka Gunaratne, two players who were close to Kokila presented the parents of their beloved friend with the jersey. In addition, two minutes of silence were observed before the commencement of the game on Saturday.

The CR & FC team, as well as the Havelock Sports Club team, sported black armbands in respect and remembrance of their deceased mate.

‘Marco’ was a selfless player. In his club rugby career of 5 years, he had made friends with almost everyone. Throughout the week, all teams took time before kick off to observe a moment of silence in memory of him.

The name Kokila Sammandaperuma will surely be missed on the team cards, but the memories he made on and off the field will surely be cherished a lifetime.