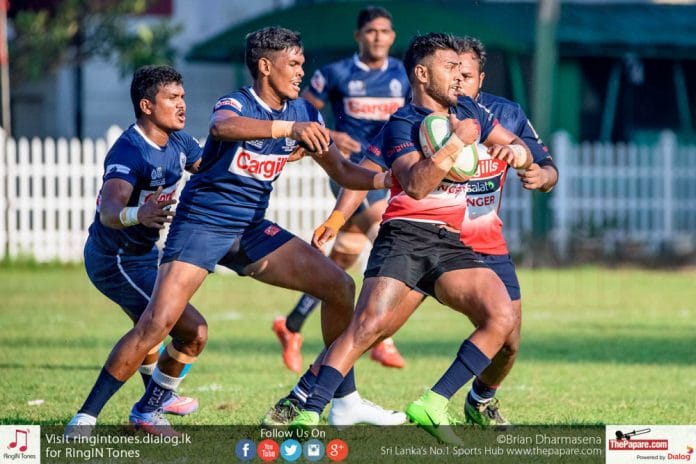 Kandy Sports Club continued where they left off in 2017 when they claimed a hard-fought 32-23 win over the Policemen in the Dialog Rugby League’s second week fixture at Nittawela.

Although the home side secured the result, they were made to work very hard for this result even after leading 17-10 at the half time as the Policemen were the better side during the second half.

Kandy was under pressure for large periods of time but they did well to fight back, and took the lead midway through the first half. But it were the Policemen who finished stronger in the final quarter and scored 2 unanswered tries during the period.

Kicking things off both teams exchanged two early penalties to be tied 3 all courtesy of their very reliable kickers Thilina Wijesinghe for Kandy and Sachith Silva for Police.

Kandy eventually took the lead courtesy of a Dhanushka Ranjan try, after winning a turnover deep inside the Police half, the ball was shifted to Danush Dayan who was taken down meters short, off the ruck Nigel did well to throw an inside pass to Ranjan, who crossed in for his first try of the season.

Thilina Wijesinghe slotted the conversion and three minutes later, the home side extended the lead again when Thilina Wijesinghe gathered a high ball from under the nose of the defence before putting Ranjan into space as he raced away to score his side’s and his second try. Wijesinghe yet again made a beautiful bisecting conversion from the corner flag. (Kandy 17-03 Police)

Police narrowed the gap when Emosi Vunivosa’s crossfield kick found touch in the far corner resulting in a line-out maul as Wageesha Weerasinghe dived over in the right of the posts. Sachith Silva did well to slot the conversion from close to the touchline which meant that Kandy went into the shed with scores locked at 17-10 in their favour at half-time.

Kandy were the fastest out the blocks in the second half, however they made a vital mistake of not collecting cleaning resulting a silly scrum. Soon afterwards,  Kandy was dealt with another blow when Shehan Pathirana was sent to the sin bin for repeated infringements in the ruck. Sachith Silva made the most of the penalty under posts. (Kandy 17-13 Police)

The visitors took advantage of their superior numbers, Vunivosa got a pass out to Sachith Silva, who shrugged off a couple of defenders before sending Gihan Silva into space crossing in for their second try. Sachith missed the corner flag conversion not extending their lead further. (Kandy 17-18 Police)

Kandy regained their numbers to full strength and simply replied with two great tries through Dhanushka Ranjan who went in for his hattrick and another by Uchitha Jayasuriya. Both tries came courtesy of good set piece moves with Buwenaka Udangamuwa being in the thick of things in both tries. Jamaldeen managed to slot in the second conversion as Thilina failed the difficult first. (Kandy 29-18 Police)

Police upped the ante on attack but despite spending large periods camped inside the visitors’ half, a 65th minute try from Wageesha Weerasinghe was all they had to show for their efforts. (Kandy 29-23 Police)

Jamaldeen then added his first penalty – a long range effort from 28 metres out as things came to a halt in Nittawela with defending champions winning unconvincingly.