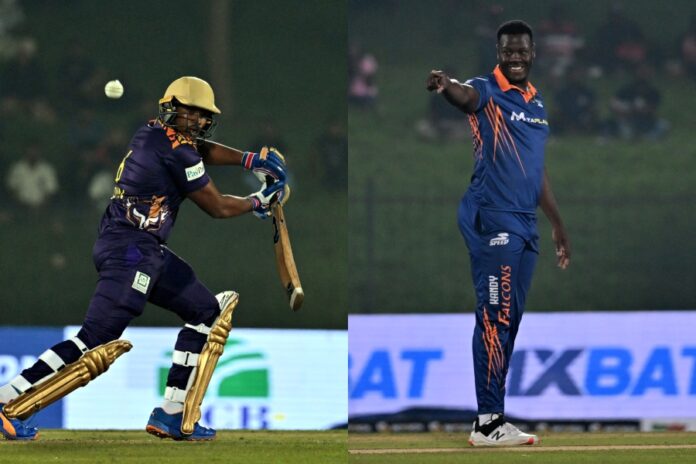 In the fourth encounter of the Lanka Premier League 2022, Kandy Falcons overcame the Galle Gladiators in a very one sided contest where Falcons registered a 5 wicket win with 30 balls to spare to make it two out of two for them.

Kusal Mendis, the Galle Gladiators skipper, won the toss decided to bat first this time and it’s fair to say what followed was something he wouldn’t have expected. Carlos Brathwaite, who was still searching for form, completely bamboozled the Galle Gladiators top half as he took 4 wickets inside the powerplay to finish with figures of 4 for 14.

With the total on 5 for 29 after the first 6 overs, The young and exciting power hitter Movin Subasinghe combined with the experienced Pakistani all-rounder Imad Wasim to put together a 65-run stand for the 6th wicket. Subasinghe, who was living dangerously at the beginning, gave 3 chances which were all put down by the Falcons fielders.

Subasinghe top scored for Gladiators, making 40 from 38 balls which included 4 fours and 2 maximums off the number 1 T20I bowler in the world, Wanindu Hasaranga. The youngster was dismissed in the 16th over as the scoreline read 93 for 6 for the Gladiators.

Wasim made 34 off 39 balls before being dismissed by Hasaranga. The UAE national player Zahoor Khan, who supported Brathwaite really well with the new ball in hand and came back to dismiss Subasinghe when they were building momentum, ended with figures of 2 for 26.

Chasing a well below-par target of 122, Fletcher gave the Falcons a flying start but it was cut short as he departed when the score was on 30. Pathum Nissanka struggled a bit but Kamindu Mendis who batted at number 3 made sure there were no hiccups with a classy knock of 44 from 34 deliveries with 4 fours and 2 sixes.

Falcons made it home in 15 overs with 5 wickets remaining and became the second team to win two games and maintain an unbeaten streak. Falcons and Jaffna Kings both have won 2 out of 2 so far and rest of the teams are winless at the moment after 2 days of LPL Season 3.