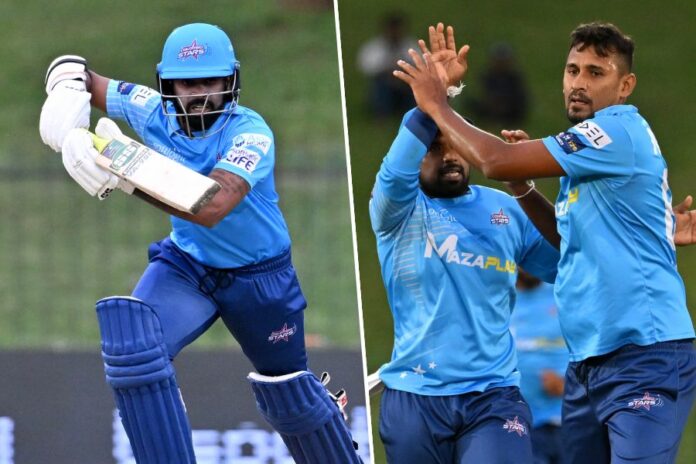 Colombo Stars had a terrible start with the bat as their top order was jolted by the pace of Lahiru Kumara who picked up three early wickets to reduce the Colombo Stars batting unit to 26/3 in the first 3 overs.

However, experienced batters Bopara and Dickwella steadied the ship for Dambulla Aura building a 54-run partnership for the 4th wicket. Dickwella took the attack to the opposition and went on to score a valuable half-century.

Chandimal’s crucial 29-run knock and a few lusty blows from Dominic Drakes down the order helped Colombo Stars posted a competitive total of 165/9 in the allotted 20 overs.

Chasing 166 runs to win, Dambulla Aura started on the fast lanes thanks to their opening pair Daniel and Cox who added 53 runs off 29 balls for the first wicket. However, after such an impressive start, they slowed down considerably as wickets continued to lose at regular intervals.

The skipper Shanaka (31*) and Abell (33) played pretty cameos at the later stage of the innings but Colombo bowlers held their nerves to pull off a solid win at the end. Colombo Stars who failed as a bowling unit in the first game against Kandy Falcons, came back strongly sticking to their game plans much better this time around.

Colombo seamers led by veteran Lakmal used the ploy of the shot ball to greater effect which helped them defend this target. Though Dambulla had a lot of power in their batting lineup, they only looked good in patches which means they will need all the jigsaw pieces to come together to win their next game having been beaten in both the games played so far.