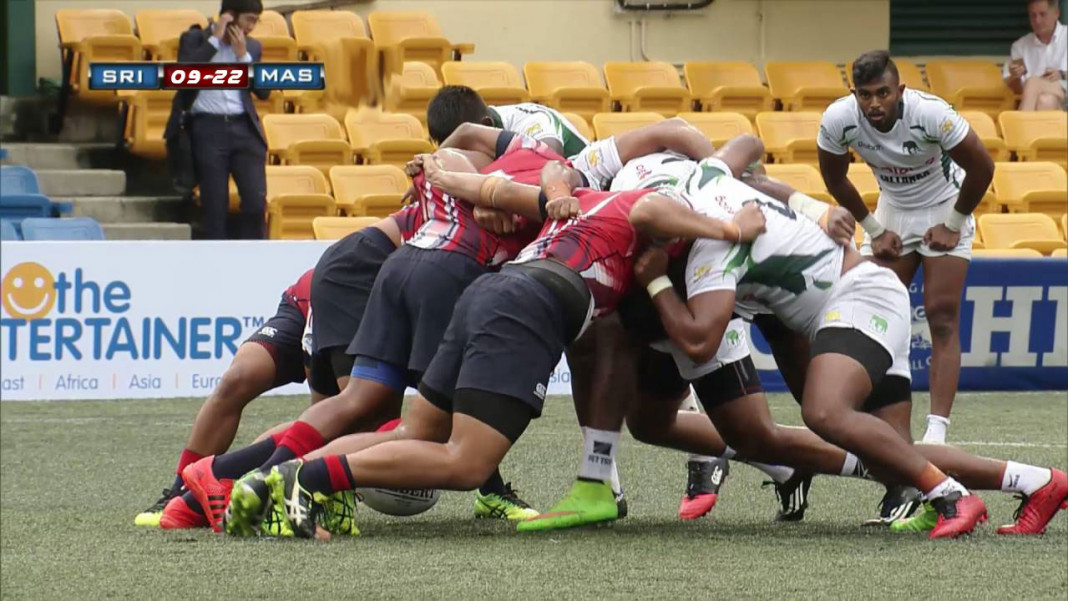 Expeditious play in the second half by the Malaysians earned them the Asian division one championship as they breezed to victory in the finals played in Ipoh by beating Sri Lanka with a 22 – 09 triumph.

Both sides stepping in undefeated headed to the field with an aim of dishing out high octane rugby. It was also a give it all contest for both teams as the side ending victorious would move to play with the big guns next year and have an espy for a spot in the 2019 RWC in Japan. The crowds were filled in numbers at the Padang stadium to support the home team when the Asraf Rosli chipped the ball to start proceedings.

The home team who were no doubt the bigger sized team showed their dominance right from the start with a scoring opportunity opening up for the Malaysians right in the first minute from a penalty conceived by the opposition but the kick taken at post was well off. This did not affect the home side much as the quick line proved deadly as Norudin received a clearance kick and off loaded it to his outside center Mawara Nasalo who planted an unconverted try. (Malaysia 05 – Sri Lanka 00)

Rough play from the Malaysians had them down to 14 14 men as the try scorer Nasalo was sent in to the sin bin. Wijesinghe went for the 3 points but failed but another penalty gifted to the Sri Lankans had Wijesinghe making no mistake kicking from the 50m line through the posts. (Malaysia 05 – Sri Lanka 03)

Things got worse for the home team as another player was sent to the dark corner for a high tackle. Sri Lanka playing against 13 men took the advantage as Prasad Madhushanka picked on a bouncing ball and flew over the try line. Unfortunately the try was not awarded by the referee due to transgression play and a penalty was given to the visitors. Wijesinghe made no mistake and added the 3 points taking his side to the lead. (Malaysia 05 – Sri Lanka 06)

Although the Tuskers kept the lead the home side had more possession in the opposite territory. Malaysia opted to play the ball with their three quarters and worked in many phases which outwitted the Tuskers. Despite this Malaysia failed with the finishes touches which cost them to throw away multiple scoring opportunities. Just before half time the Tuskers were at the receiving end of another penalty but this time Wijesinghe missed it and the visitors went in to the dressing room with a one point lead.

The Tuskers who played a very defensive game in the first 40 minutes, commenced the second half play with a different approach. The backs worked the ball wide and quick play was fashioned to the game. The first 10 minutes  saw the Tuskers keeping possession in the opposition territory. The big forwards of Malaysia failed to release a tackle which gave the Tuskers another chance to increase their lead. Thilina who put through two long kicks prior, sliced in the ball through the posts to give a 4 point lead to the visitors. (Malaysia 05 – Sri Lanka 09)

In the mid of the later half the game was played in a typical test rugby fashion as both teams tried to keep the ball in possession. But the host stunned the Sri Lankans in the 63rd minute when crack center Terence Gavidi barged his way through two defenders to jump over the line and score under the posts. Norudin added the extras with ease to put the hosts back to the front seat. (Malaysia 12 – Sri Lanka 09)

The scoring momentum flowed in the blood of the host as they further increased their lead when Wong Wye took in an offloaded pass and breezed his way over the try line. Aqil Kamsol took the kick from the left corner and pierced it through the posts. (Malaysia 19 – Sri Lanka 09)

The Tuskers needed to score twice now to get themselves back in the lead. But they couldn’t pass through the Malaysian defense line. In the 73rd minute of play Malaysia amplified their score with a penalty booted from Kamsol. (Malaysia 22 – Sri Lanka 09)

This sealed the deal for the home side as couple of minutes later referee Otsuki blew his long whistle giving the home side the ticket to cross in to the Asian top division.